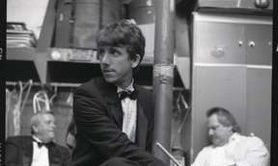 10/06/2007
Smalls
The Harry Whitaker "moment to moment"
Upcoming Shows
Harry Whitaker is a UNIVERSITY. Born September 19th, 1942 in Pensacola, Florida, Harry began playing the piano at the age of five. When his family moved to Detroit for his junior high years, Harry jumpstarted a career spanning over four decades - Jazz! At 14, he was already beginning to make a living at it. Throughout high school he performed with a contemporary jazz quintet, playing gigs in and around Detroit. He soaked up all that the much-older and more-experienced musicians he met would teach him and went straight on the road upon graduation at 17 as the youngest member of the Ray McKinny Quartet. Motown hit Detroit just as Harry was leaving and, although the pull to stay and be part of the scene was enticing; New York was where his jazz heroes were. At 18, he headed for New York, putting in the obligatory day job time, working weekends and nights at any and every music gig he could. After only four years, Harry landed a year's work traveling with the famous Lloyd Price Band supporting their hit Personality". Returning from the road in '66, Harry joined the Eddie Jacobs Band; performing rock and roll and R&B in the clubs and concert halls of the tri-state area. But the road beckoned again, this time with a call from Al Kooper of Blood, Sweat and Tears to join a tour of California in '69. 1970 greeted Harry with an opportunity that would capture his focus for the next four years. He joined up as piano player for vibraphonist Roy Ayers' Ubiquity" and embarked on a world tour, while arranging for them, in addition to playing, on their Ubiquity and Hot albums for Atlantic, gaining recognition and acclaim for his work on the hit Sweet Tears" as well as on their Polydor soundtrack for the Pam Grier movie Coffy. Following his recording with songwriter Eugene McDaniel ("Feel Like Making Love"), Roberta Flack asked Harry to join her band, where he served as Musical Director & Arranger. Work with Roberta Flack took Harry around the globe and during his 8 years with her, artists such as Pattie Austin, Luther Vandross and Gwen Guthrie came on board (that's Harry playing on Ain't Nothin' Goin On But the Rent" by Guthrie) and he garnered two gold records for Ms. Flack's Blue Lights in the Basement and Feel Like Making Love albums. When Roberta called asking if Harry could do Japan with her and one of his jazz heroes, Miles Davis, Harry replied, where's my ticket?" He won a standing ovation when commissioned to arrange Stevie Wonder's I Can See the Sun" as a symphony for Ms. Flack and the 100-piece Edmonton Symphony Orchestra. Over the years, Harry's independent focus has been on performing, recording, arranging and composing; garnering acclaim for work with such artists as Carter Jefferson, Phyllis Hyman, Loredana Berte, Mtume, Lola Falana, The Spinners, Carmen Lundy and more. He's appeared on numerous television shows (Johnny Carson, Merv Griffin, etc) and conducted the Edmonton Symphony Orchestra for PBS. Even the sporting industry calls on Harry, with performances at the Kentucky Derby, the NY Knicks opening ceremonies at Madison Square Garden and Pele's last game in the Soccer Bowl of '78 at Giant's Stadium. He was awarded a gold record for his work on Stephanie Mills Stephanie album and is famous in Japan for his work with the legendary jazz trumpet player, Terumasa Hino. He is especially proud of his recordings for Cheetah Records and the brilliant bass player, producer, and childhood friend, Teruo Nakamura. Harry has also been a driving presence in New York City's jazz scene at such hot spots as Birdland, Smalls, The Village Gate, Bradley's, Sweet Basil, The Blue Note, including his weekly stint at Arturo's. Weblinks: www.harrywhitaker.com