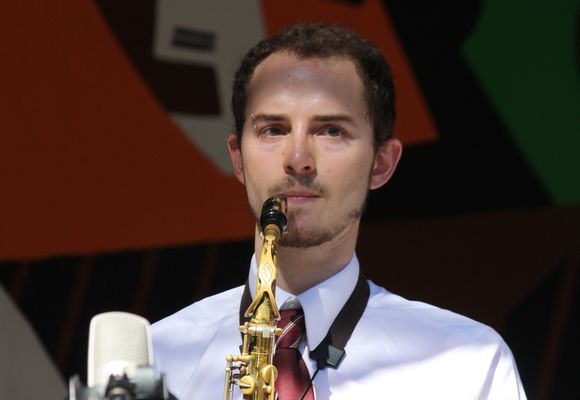 Composer, saxophonist, and educator, Remy Le Boeuf has a fresh and forward-thinking ear for blending his strong jazz roots with his clear classical, indie-rock, and electronic influences, defying genre and creating an energetic sound that is both intellectual and accessible to any audience.  Le Boeuf was born in Santa Cruz, California, and in 2004 he moved to New York City where he performs regularly as a bandleader, sideman, and as co-leader of Le Boeuf Brothers. He received his Bachelors and Masters of Music degrees from the Manhattan School of Music while also studying philosophy and Anthropology at Columbia University. In 2011, he received a Chamber Music America New Jazz Works Commission to write a large chamber work based on the short stories of Franz Kafka.  In addition, he has received a National Foundation for Advancement in the Arts (NFAA) Astral Grant, the ASCAP Foundation Young Jazz Composer Award six times, the New York Community Trust Edward & Sally Van Lier Fellowship Grant, several Downbeat Student Awards, Best Jazz Album in the 2006 Independent Music Awards, and he was the West Coast Songwriters Song Contest Jazz Category Winner in 2007.  Le Boeuf is an active performer and has performed at Carnegie Hall, The Monterey Jazz Festival, The Kennedy Center, and tours internationally with his ensemble, Le Boeuf Brothers.  His latest album, “In Praise of Shadows,” was released in October 2011 on Nineteen-Eight Records.  For more information visit www.LeBoeufBrothers.com