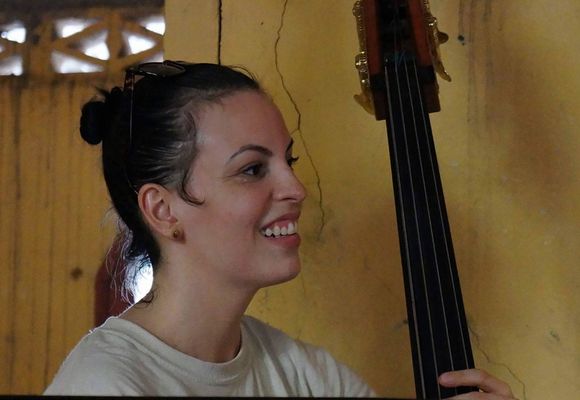 Hey! So before you read my third-person bio, I just want to preface it with a giant thank you to all my teachers throughout the years.  I've been so blessed.  Ron Carter, Buster Williams, Reggie Workman are some names you might know and they're my heroes.  I've also had the extreme privilege of learning from the following badass bassists, in backward chronological order: Ben Wolfe, Orin O'Brien, Homer Mensch, Chip Jackson, Cameron Brown, Bob Cranshaw, Doug Weiss, Rick Petrone, Bill Pace and Joe Reichgott.  Thank you for the inspiration, I'm forever grateful.

Cuban-American bassist Renée Cruz was born and raised in Miami, FL.  She moved to New York City in January of 2001 to study with her musical heroes.  Since then, she's had the honor of studying with bass legends Ron Carter, Buster Williams and Reggie Workman.  She earned her Bachelor of Fine Arts from New School University for Jazz & Contemporary Music in 2004 and her Masters of Music from The Juilliard School in 2007.

During her time at New School, she won the Sisters in Jazz Collegiate Competition of International Association of Jazz Educators.  In the interest of spreading awareness for women's empowerment, she performed and toured with the group.  She also received the Beacons in Jazz Music Award for Outstanding Musicianship from the New School and was featured in an honors performance with saxophonist Joe Lovano.

In 2005, she was accepted into the Betty Carter Jazz Ahead performing composers residency, where she worked with Curtis Fuller and Kenny Barron.  She was hired by Dr. Billy Taylor to perform at The Kennedy Center as part of an educational initiative called Jazz for Young People.

In the fall of 2005, Ms. Cruz was awarded a full scholarship to the Juilliard Jazz program.  She holds the distinction of being the first woman bassist in the program.  While attending Juilliard, Renée worked with many outstanding jazz musicians, including Jimmy Heath, Hank Jones, Frank Wess, Joe Wilder, Gerald Wilson, Ernestine Anderson and recorded with Benny Golson.  She earned her Masters of Music Degree in Jazz Studies from The Juilliard School in 2007.

After graduating from The Juilliard School, Renée was notably hired by legendary pianist and composer Harry Whitaker (Roberta Flack, Roy Ayers) as part of his trio and group 'Moment to Moment', performing weekly at Smalls Jazz Club and other NYC venues.

Ms. Cruz is dedicated to teaching music and she's been doing so since 2001. She's made an impact in classrooms and after school programs across the five boroughs of New York City and brought music education to diaspora communities, as part of outreach initiatives by the Harmony (Housing Authority Residents Musicians of New York) Program and The Juilliard School Music Advancement Program, Lincoln Center's We Bop! Jazz Education Initiative.  She also served as Associate Director of the Jazz Standard Youth Orchestra, under David O'Rourke, where she helped steward the development of the young men and women musicians. She's performed a master class series with trumpeter Jeremy Pelt for this program as well, for public school children to learn about the cultural legacy of Jazz music at The Jazz Standard Discovery Program.

She partnered to curate music for the First Fridays community series at the Brooklyn Museum to bring the Afro-Latin Jazz Alliance Youth Orchestra there to perform for the community. Led by Grammy-Award winning composer and pianist, Arturo O'Farrill, Renée has been an advocate for the mission and successfully partnered to obtain weekly rehearsal space for the youth ensemble.

Most recently, she developed a master class curriculum with NEA Jazz Master Larry Ridley as host, "The Roots that Produce the Fruits", to introduce school children to the history of Jazz in America and Diaspora Music and Culture.  This program incorporated not only Jazz music and history but also chess and table-tennis to foster creativity, improvisation and critical inquiry to empower the students.