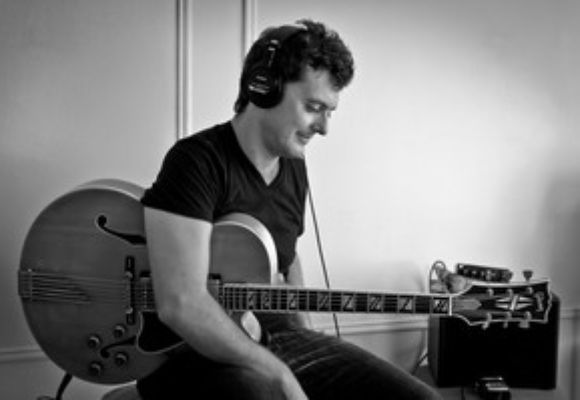 Peter Mazza is an exciting jazz guitarist born and raised in New York City. He obtained a Bachelor of Music from the Manhattan School of Music and a Masters Degree from Juilliard.

Peter went on to gain acceptance to the prestigious Thelonius Monk Jazz Competition, where he was ranked semifinalist.

Most notable is his longstanding Sunday evening residency at the Bar Next Door at Lanterna Di Vittorio in its 10th successful year. His passionate, original compositions as well as his creative and virtuoso interpretations of jazz standards blend clean and fluent lines with colorful and inventive chord voicings. He creates imaginative ensemble arrangements as well as lush solo guitar pieces. In addition to his archtop jazz guitar, Peter plays an acoustic guitar in an array of altered tunings when performing, and has also used a Roland RC-20 Pedal to create live recorded loops that provide a base of ambient textural grooves that underpin the interactions of the group.

Peter was signed to Late Set Records out of Tokyo (2007)who produced his debut release of "Through My Eyes" featuring 8 originals and 2 standards, rearranged. He was invited on two extensive tours there to present his music.

He is currently recording a solo guitar CD that will be available this Fall.