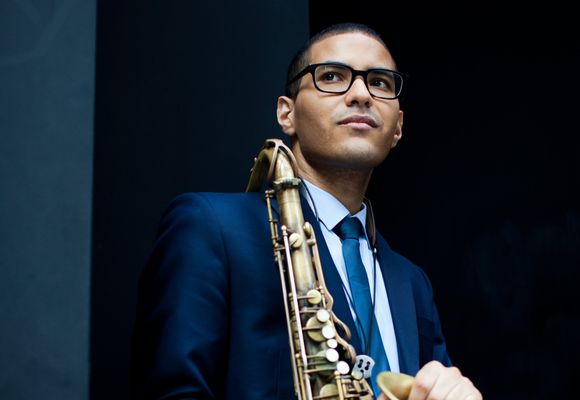 "I play music because I like to listen to music, and when I'm playing I'm in charge of what I'm hearing."

Jonathan Beshay-jazz saxophonist, bandleader, and composer-says that there's no other agenda when his group takes the bandstand.  Fortunately for audiences, Beshay likes to hear good music.

His first role models were the old masters of jazz (John Coltrane, Charlie Parker, and Lester Young) but it would be a mistake to assume that modern music isn't fair game for Beshay.  Artists such as Walter Smith and John Ellis make their way onto his list of influences, all uttered in the same breath as Coleman Hawkins and Woody Shaw.

When pressed, he compares his musical process to the late Mulgrew Miller's; something that is rooted deep down in the history of jazz, but has blossomed outward into an art that is unique and new.

The result is an adaptable, energetic, fearlessly hard-swinging sound that pulls from a vast body of musical sources.  Beshay has no trouble moving from the street-band wailing of traditional jazz to the intricate post-bop melodies of a Joe Henderson tune.  It's all fair game, “. . . as long as it sounds good!”  And it does sound good—these musicians are hungry, playing with the fire and easy confidence that come from being completely at home in a genre.

Beshay's band is a mix of fresh young faces, some familiar and some not.  The 2011 graduate of Michigan State University is working hard to push his own writing and that of other people his age.  “The future of the music is in my peers,” he says, and that's fueling his drive to create a band that's more than just a collection of disparate individuals.  “The way that Miles Davis, Art Blakey injected their bands with such incredible personality, such a strong unified sound . . . that's the level I'm aiming for.”

He's also been playing with Winard Harper's band for more than two years, serving as the musical director on tours through the Kennedy Center for the Performing Arts, the Jazz Showcase in Chicago, and the Omani Royal Opera House.  Between that, a brief stint with Delfayo Marsalis in New Orleans, a Downbeat Magazine award, and playing in Jason Marshall's big band, the young saxophone player is keeping very, very busy.