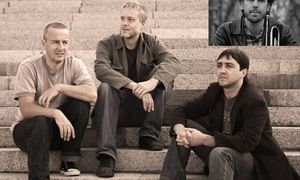 06/09/2012
Smalls
Bulgaria Meets New York
Upcoming Shows
A native of rural Central New York, saxophonist/bandleader/composer Paul Carlon has been active on the New York City jazz and Latin jazz scenes since 1991. Paul has since traveled the world performing, teaching, and recording with a wide range of artists including Juan Pablo Torres, Harvie S, Tony Allen, Grupo los Santos, Rumbatap, Sonido Isleño, Swingadelic, Clave y Guaguancó, the McCarron Brothers, the Ileana Santamaría Orchestra, and Phil Woods, as well as leading his own groups. Paul has also appeared in film, on television and on the radio, and has written music for film and served as Musical Director of various groups. He completed a Masters Degree in Music Composition at The City College of New York in 2005, where he studied with Mike Holober, John Patitucci and American master David Del Tredici.Pauls main musical fascinations, both improvisationally and compositionally, are the history and tradition of innovation and of swing in jazz, and the music of the Afro-Latin diaspora. An avowed Ellington/Strayhorn fanatic, Paul is equally captivated by Los Van Van, Pixinguinha, Charles Mingus, Stravinsky, Gene Ammons, Lenine, Eva Ayllón, Muddy Waters, and Gil Evans, among many others. A fluent speaker of Portuguese, Paul has spent time in Brazil and also in Cuba and Colombia, immersing himself culturally and artistically in the search for understanding. His compositions express this wide range of interests, diffracted through the lens of the jazz stylists and composers that have been an obsession from an early age.