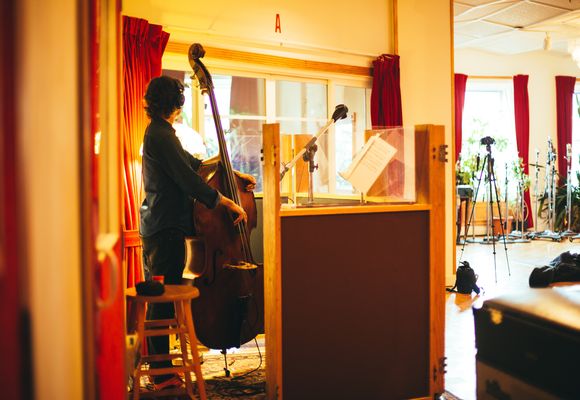 Bassist and composer Desmond White is rapidly becoming one of New York City’s most in-demand sidemen, as well as leading his own group performing his original material drawing influence from the worlds of jazz, pop/rock and folk music. Originally from Perth, Western Australia, he is a graduate of the West Australian Academy of Performing Arts.  He has performed with some of Australia’s leading jazz artists including Joe Chindamo, Jamie Oehlers, Rumberos, Los Cabrones, Julien Wilson, Mark Fitzgibbon, Stephen Magnusson, James Muller, Zac Hurren, Scott Tinkler and many others.  He was a founding member of the ARIA winning pop/rock group Washington, touring extensively with this band to major festivals around the country. After building a successful career in Australia, he relocated to NYC in 2009 to pursue his Master’s degree in Jazz Performance on a full scholarship from the Manhattan School of Music.

He now performs regularly with New York-based artists including Gilad Hekselman, Nir Felder, Camila Meza, Shai Maestro, Ari Hoenig, Matt Wilson, Marko Djordevic, Barney McCall, Sean Wayland, Alex LoRe, Lucas Pino and numerous others.  He is a recipient of the ArtsWA Creative Development Fellowhip, the Australia Council’s Skills and Development grant and the PPCA Performers Trust Fellowship.  He was a finalist in the National Jazz Awards at the Wangaratta Jazz Festival in 2008.  Recently he was awarded the prestigious ArtsStart grant from the Australia Council, to further develop his composition and publishing business.  His 2008 release “Open Land” showcased his unique compositional style, and was critically acclaimed by press and radio in Australia.

He recently released the cross-over album “Short Stories” on Biophilia Records in the US,to critical acclaim. The record marks a culmination of over 2 years of Desmond’s writing, production, multi-instrumental performing and singing, straddling Jazz, Indie Rock and Folk genres.