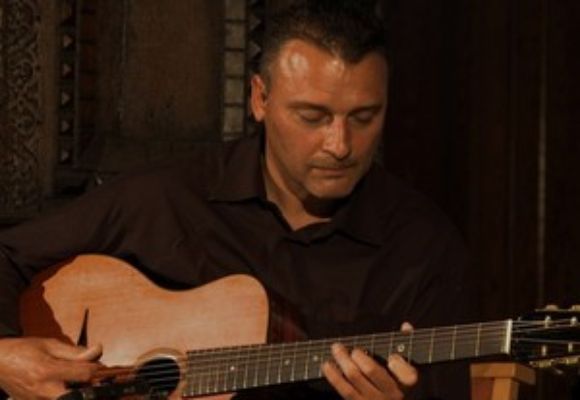 Raised on Gypsy swing from an early age, he is a guitar master, composer, bandleader and arranger, Lollo comes from an elite family of Gypsy players and is cousin to the great Fapy Lafertin and Stochelo Rosenberg. His goal: to carry on the music of Django, with a style and technique thats traditional, melodious, lyrical, sensitive and joyful. His mellifluous compositions have a refreshing authentic Django flavour and are played with extraordinary talent, unique style and amazing suppleness that clearly reflects that he makes music he loves. His Quartet is sought after around the globe for private functions and renowned jazz festivals, famous for playing lesser known Django tunes and his own compositions. A man of style, grace and humour, Lollos pure melodious playing touches his audiences and makes Djangos music as fresh today as it was 80 years ago. As well as performing, he spends much of his time teaching sought-after master-classes, sharing his artistry and passing down Djangos legacy. A remarkable man, with a remarkable style of playing. Out of 15,000 world entries in the 2005 International Song Writing competition, Nashville USA, Lollo Meier became a finalist with Melody for Le QuecumBar, with honouree status and became part of the top 1.4% of entrants.

Learning to play the guitar with Lollo means that you can throw away any books you bought on this subject. His technique is amazing. When he plays rhythm it sounds like 12 strings instead of 6. You hear a train leaving the station, a power that I have never heard before. Oh my God how does he do that? I fooled myself for a while thinking it must be his self-made plectrum so I tried all the plectrums I could lay my hands on but than I realised the painful truth, it's the motion, the motor, it's the right hand it's like walking through a forest and when you come home you realize that you can't remember seeing a single tree. Learning the chords is one thing but starting up the diesel-train is a different ballgame. Better watch his right hand rather than his left hand it holds the key! Lollo gave me his secret, he gave me Django.