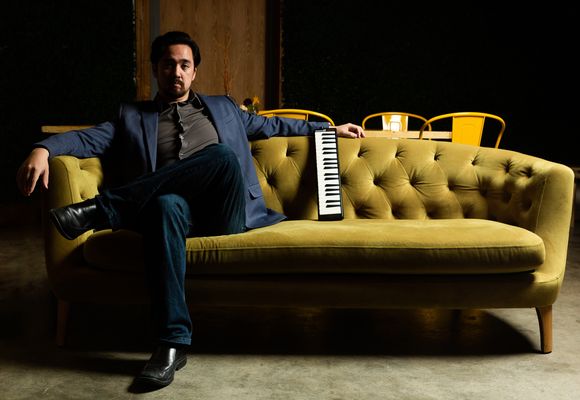 One of the most striking qualities of Mike Bond’s superb debut recording, The Honorable Ones, is the understated, sophisticated way in which the 30-year-old pianist-composer subsumes his abundant technique for imperatives of beauty and self-expression. His sophisticated, restrained, nuanced jazz aesthetics — grounded in exhaustive study of antecedent master practitioners of his instrument and animated by his devotion to the freedom principle — spring directly from his personal history.

The son of a Caucasian physics professor and a first-generationChinese-American stay-at-home-mom whose parents migrated to the U.S. after the Cultural Revolution, Bond started playing piano at age 4. Two years later, he won his first classical piano competition at Weill Recital Hall at Carnegie Hall, launching a long period during which he participated in contests at which he and his peers played repertoire by Beethoven, Bach, Mendelssohn, and Haydn. Burned out by the pressure of performing, he withdrew from that world at 11.

“When I was 5, my focus was on not messing up in front of my parents and all these people I didn’t know,” Bond recalls. “I wasn’t enthralled with the creative aspect of music. I had a strict teacher who directed us to interpret a piece of music exactly as he felt it should be interpreted – ‘Get loud here, get soft here, watch the phrasing here.’ I didn’t get what interpretation was until I quit and discovered Chopin’s music on my own, and learned what the word ‘rubato’ was. Then I felt I had more autonomy when faced with written music — I can flex tempo, create my own dynamics.”

His jazz education began soon thereafter, as a saxophonist in middle school and high school jazz band near Princeton, N.J., where his parents had moved from Old Bridge, N.J., where he spent his first ten years. “I played saxophone, clarinet and sang in various ensembles — the orchestra, the studio jazz band, wind ensemble, concert choir and marching band,” Bond says. “But when I was 14, my freshman year of high school, the band director needed a jazz piano player for his ensemble, and I was struggling with the chord changes.”

To rectify the issue, Bond was sent to study with pianist Jim Ridl (best known for his long association with Pat Martino), who lived in a neighboring town. “I was mesmerized by Jim’s playing,” Bond says. “I wondered how he could just improvise. He introduced me to my first jazz records. Jim gave me the basic tools — the forms, the basic tools of improvisation, the building blocks.”

After high school, Bond matriculated at Rutgers University, where he studied with Stanley Cowell. “Stanley taught me to embrace music as ‘a mirror of the mind, and the piano as an extension of myself.” “He helped me see the piano as the whole orchestra and shared with me his innovative methods for approaching counterpoint and harmony” he says.

“I also would go to New York to study with Mike LeDonne, because I wanted to actually learn how to play in the be-bop and hard-bop styles.   As a sophomore, I realized I wasn’t swinging and I had to figure out how. Then I realized that I had to check out the history; I couldn’t understand what Herbie Hancock does until I understood what Red Garland and Wynton Kelly were doing. With Mike, I really studied, the older cats and the newer cats who embodied the bebop and hard-bop language;  those who created it and those who wielded it at the highest level: Bud Powell, Hank Jones’, Barry Harris, Ahmad Jamal, and Kenny Barron, Mulgrew Miller. They embody to me what it means to play this music at the highest level.”

During his time at Rutgers, where he received the Excellence in Jazz Performance Award and the Arthur G. Humphrey award for Music Education, Bond met Orrin Evans, who serves as Artistic Producer of The Honorable Ones. Evans took the younger pianist under his wing, and sustained their mentoring relationship when Bond moved to the East Harlem neighborhood of New York City after graduating in May 2012 with a Bachelor's of Music Degree in both Jazz Performance and Music Education. In addition to periodically hiring Bond to play piano in his Captain Black Big Band, Evans recommended him to bass maestro Curtis Lundy, who hired Bond for his first New York engagement. Meanwhile, Bond spent two years working for SmallsLIVE, the imprint of Smalls Jazz Club, where he learned to produce albums and video-edit, while meeting numerous musicians, promoters and producers.

These days, Bond — who moved back to Central New Jersey in North Brunswick — boasts a c.v. that includes shows with the magisterial tap dancer Savion Glover, Latin projects led by trombone giant Conrad Herwig, and hardcore jazz gigs with masters like saxophonists Mark Gross, Joe Ford and Bruce Williams and trumpeters Joe Magnarelli and Duane Eubanks. He is a featured sideman on guitarist Jean Chaumont’s debut album “The Beauty Of Differences” which received a 4 star review in Downbeat Magazine.

As a leader, Bond has performed at Smalls and Mezzrow, as well as the Central Jersey Jazz Festival, the Canadian Music Festival in Toronto, and the New York City Winter Jazz Festival. He’s music director at the non-denominational Jacob’s Well Church in New Brunswick, N.J., and is a Community Advisory Board member for the award winning jazz station 88.3 WBGO.

Ancillary to his activity in the musical theater world, in which he became involved while at Rutgers, Bond also works several days a week playing for singers at their lessons and providing vocal coaching. “I talk about the character, the phrasing, making organic choices, bridging the gap between music and acting, and I reinforce what their teachers have taught them technique-wise,” Bond says.

“One thing I haven’t liked about these audition situations, where the singer puts the music in front of you and the piano player plays, is that it’s not a collaboration. It’s about sight-reading. So my challenge is: How musical can I be with a piece that I’ve never seen before? How quickly can I hear and embrace melodies I’ve never played before and how much more musical do I need to be with a piece that I’m familiar with? I think my tendency — and a lot of piano players — sometimes is to show your chops, especially when you’re being recorded. For my first record, I instead decided I wanted to create emotion within melody. That was an intentional desire — to create emotion within melody.”