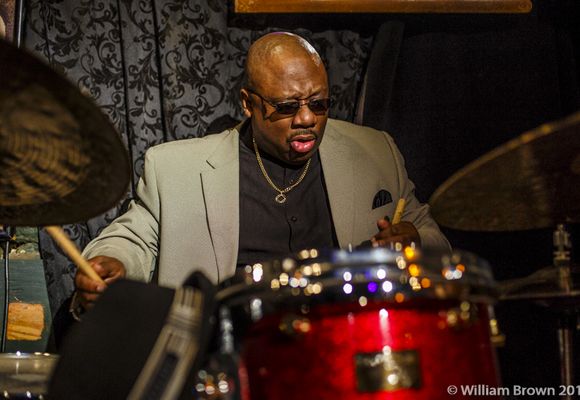 For more then 30 years, Ralph Peterson has been one of the distinctive and

recognizable drummers in jazz. Besides his incomparable talent behind the

drum kit, which has led to collaborations with the likes of Terence

Brecker, Regina Belle, Betty Carter and The Roots over a nearly thirty-year

drummer in the legendary bandleader’s Jazz Messenger Big Band until

A great sequel is a rarity worth waiting for. Drummer/composer Ralph

on TriAngular III, due out April 8 via Peterson's own Onyx Music label

and Truth Revolution Records and. This time out he's joined by brothers

Zaccai and Luques Curtis on piano and bass, adding a new incarnation to the

only a showcase for Peterson's boundless energy and imagination, but also a

testament to the healing power of music. The album was recorded, mixed

and mastered as Peterson was being diagnosed and treated for colorectal

cancer, becoming a sterling symbol of his successful battle against the

Mr. Peterson also remains in high demand as an educator does workshops

and clinics with the support of his endorsers Mapex Drums, Meinl Cymbals,

is undeniable and constant. He has been on more then 150 other CD’s as a

sideman with other artists. He is at the apex of his power as a drummer,

bandleader, teacher and mentor. His list of students constitute a who’s who

of today’s amazing up and coming drummers like Ari Honig, E.J Strickland,

Off the bandstand, Mr. Peterson has also conquered many challenges in his

life. He gives back to young people in his work as Full Professor of

Percussion at Berklee College of Music. He holds a Black Belt in Tae Kwon

Do and has recently been promoted to 4th Degree Black Belt, which is