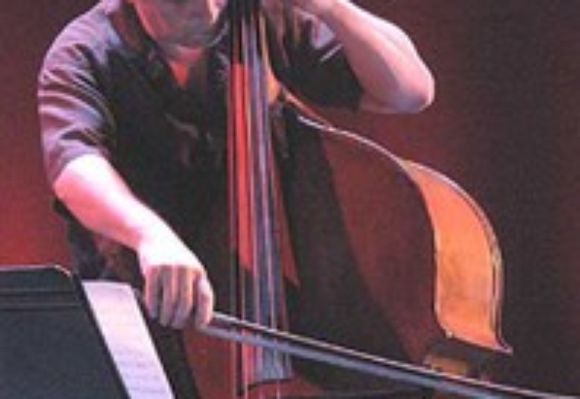 A native of Buenos Aires, Argentina, who now lives in New York City, Pablo Aslan has specialized in an acoustic-oriented blend of tango and post-bop jazz in the '90s and 2000s. The acoustic bassist is not a tango purist any more than he is a jazz purist; although Aslan has been greatly influenced by the late bandoneon innovator Astor Piazzolla -- a musical revolutionary who was as important to tango as alto saxophonist Charlie Parker was to jazz -- he has also been affected by jazz greats who range from Oliver Nelson, Duke Ellington, and Charles Mingus to Gato Barbieri and Charlie Haden. Aslan isn't known for what jazz musicians refer to as "blowing dates" -- that is, loose and informal sessions that emphasize blowing, jamming, and improvising. Rather, the Argentinean musician is coming from more of a bandleader/composer/arranger perspective, which is something Aslan has in common with Nelson, Ellington, and Mingus. In fact, one hears a lot of Mingus' abstraction in Aslan's tango/post-bop work.

Since moving to the Big Apple, Aslan has co-led various tango-friendly groups with bandoneon player Raul Jaurena, including the New York Tango Trio and the New York/Buenos Aires Connection. In addition to playing with pianist Pablo Ziegler's Quintet for New Tango -- a group that is named after Piazzolla's New Tango Quintet, which Ziegler was a member of for more than ten years -- Aslan has led a sextet called Avantango, whose members have included Diego Urcola on trumpet, Oscar Feldman on tenor sax and flute, Dario Eskenazi or Gustavo Casenave on piano, Hector del Curto on bandoneon, and Leonardo Suarez Paz on violin. Much of Avantango's work is instrumental, although vocalist Roxana Fontan has been featured on some of their recordings.

Along the way, Aslan has crossed paths with a variety of singers and musicians; he has played with saxman Joe Lovano and vibist Gary Burton on the jazz side, but he has also been employed by Latin stars who range from Julio Iglesias to Shakira. Aslan, in fact, appeared on the English and Spanish versions of Shakira's hit "Objection (Tango)" in 2001. Interestingly, the South American bassist has also dabbled in Jewish klezmer, appearing on albums by clarinetist David Krakauer and violinist Alicia Svigals. In 2003, Aslan and his Avantango band recorded their album Avantango for the independent ZOHO Music; the disc, which includes several Piazzolla compositions, was released in February 2004. ~ Alex Henderson, All Music Guide