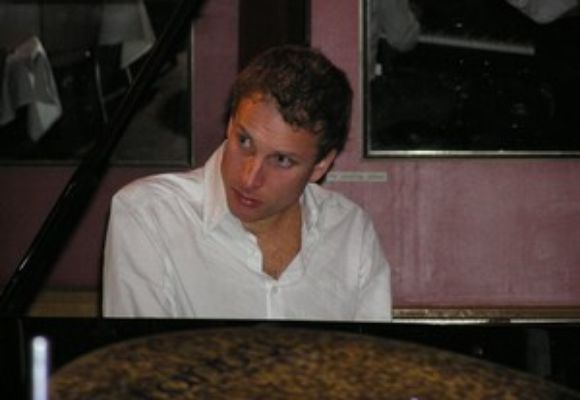 The Benny Lackner Trio featuring Derek Nievergelt and Robert Perkins was founded in New York in 2002. Having come together through mutual friendship and admiration, the three members began to play regularly in the local jazz scene. The trio very quickly began to formulate a unique sound and approach to playing and selecting material for a piano trio. This sound is a direct result of the influence of the trios of Keith Jarrett,

Ahmad Jamal, Brad Meldhau, Bill Evans, and others. The result of this early collaboration is the recording of their first album "Not the Same" released to critical acclaim in 2004 (Where the BadPlus goes for the jugular on it's recordings, the

Lacknerites keep it understated, a rarity for any jazz album, JazzTimes) ....The trio followed up with, "Sign of the Times" in 2006, ( Sign of the Times proves itself a wonderfully realized work of art, every tune a highlight, they give the piano trio a muchneeded facelift." -All About Jazz)

The second half of 2006 finds the trio taking the next step in its' evolution, once again taking to the studio to self-produce its third and most original album yet. Benny Lackner attributes the success of the trios many tours and critically acclaimed records to the fact that theirs is a true band approach. "We operate as a collective, every member has equal input in terms of musical ideas that help develop the style and sound of the group."

The other key ingredient to this band sound is the careful selection of material. On record and in concert one will hear the band play everything from sharp and stylish original pieces, to inventive covers of popular songs by artists such as Bjork, Jimmy Hendrix, Prince, Nick Drake, Nena Feist, as well as insightful arrangements of the music

of Mingus, Monk, and Gerschwin. Their sonic embellishments on the sound of the acoustic piano trio (slight electronic enhancements by Lackner and some drum programming by Perkins) give the overall sound a subtle yet modern, ambient feel.

The Benny Lackner Trio has headlined at jazz clubs such as the Blue Note- NYC, Joe's Pub-NYC, Joe Zawinul's Birdland-Vienna and the A-Trane in Berlin and has toured the U.S.A., Germany, Austria, Turkey, Spain, Greece, Portugal, Slovakia and the Czech Republic. Currently they tour in Europe every six months expanding their territory every time. They are scheduled to do at least two European tours in 2007 as well as several festivals.