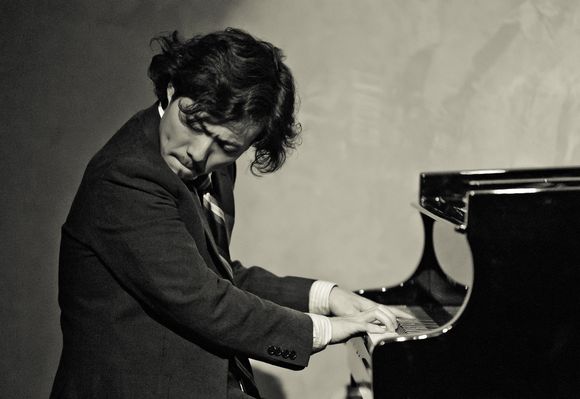 A native of Hiroshima, Japan, Takeshi Ohbayashi began playing piano at the age of two.

Ohbayashi studied film scoring and composition at Tokyo College of Music, but it was not until he attended a jazz piano clinic during his freshman year, that he found his calling to jazz. He was awarded a scholarship to the renowned Berklee College of Music in Boston, where he began his studies in 2007. Following this, Ohbayashi was awarded the Best Player Award and the Audience’s Favorite Award in the 2009 Yokohama Jazz Competition. In Fall 2009, Ohbayashi was selected to be a part of the opening class of the honorable Berklee Global Jazz Institute, led by Danilo Perez. During his time in the Berklee Global Jazz Institute, Ohbayashi performed and taught alongside world class musicians in music clinics around the world.

Ohbayashi graduated from Berklee in 2011 and currently resides in New York City where he leads his own trio and co-leads the New Century Jazz Quintet, with Grammy award winning drummer Ulysses Owens Jr. Ohbayashi quickly garnered reputation as an in demand pianist/keyboardist between world class jazz musicians in New York City. Some of the notables that Ohbayashi has played with internationally include Takuya Kuroda, Jose James, Terri Lyne Carrington, Hailey Niswanger, Charles Turner III, Felix Peikli.

Ohbayashi performs both as a sideman and leader regularly at New York jazz staples such as: Blue Note, Jazz at Lincoln Center, Small's and Smoke, to name a few. Frequently on tour, Ohbayashi has traveled domestically and internationally to over 30 different countries with a myriad of NYC based artists.

In 2016, Ohbayashi received 1st place at the Jacksonville Piano Competition, being the first Japanese pianist in history to do so. That same year, New Century Jazz Quintet won the DCJazzPrix at the DC Jazz Festival.

In addition to his illustrious performing career, Ohbayashi is also an accomplished and reputable educator. He travels abroad to perform and teach with the tour organized by Jazz at Lincoln Center, JazzReach.

Ohbayashi has released 3 records as a leader. His most recent release, “Manhattan”, has received “Jazz Japan 2016 Album of the Year”