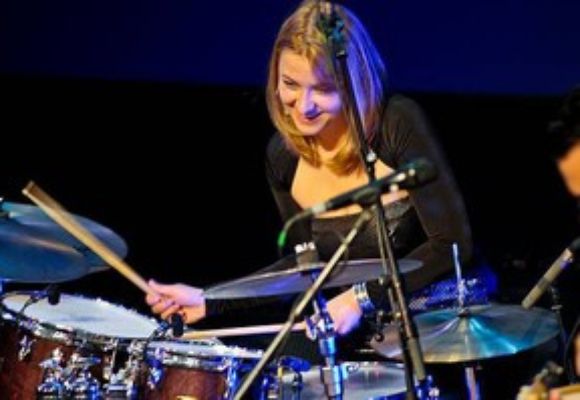 The Dorota Piotrowska Quartet "Round Midnight"

"Round Midnight" with: Dorota Piotrowska Quartet

Drummer Dorota Piotrowska, originally from Lubin, Poland is known on the New York jazz scene for her swing feel and compositions that encompass modern themes rooted in traditional rhythms. Her band is comprised of a lively mix of musicians that seamlessly blend neo-bop and Latin influences in a progressive eclectic sound that references her background in dance and literature.

After studying classical piano from the age of seven to thirteen, Dorota discovered the freedom of the drums when a high school friend invited her to his band's jam session. She recalls sitting in a corner when the friend handed her a pair of drum sticks and jokingly demanded she play. "I thought he was nuts but when I sat down at the drums, I discovered something new," she said. " I found my voice within. It was natural and I had something to say that was different than when I played piano," she continued. "I was converted."

Dorota attended the University of Wroclaw where in 2006, she received a B.A. in French Philology, which gave her a life long appreciation for story telling and the structure of form. She combined her college studies with her love of music, performing and touring with a Cuban ensemble. After University, she decided to continue her passion for jazz at the Conservatorium van Amsterdam where she was introduced to the music of Ralph Peterson. A person of strong commitment, Dorota was inspired to move to Groningen, Holland to study with Mr. Peterson who has since become her musical and life mentor. A one week college trip to NYC resulted in her enrolling in an exchange program at Long Island University in Brooklyn, NY and later transferring to The New School where she earned a B.A. in Jazz Performance with a concentration in drums in 2012.

Ms. Piotrowska gained valuable performance experience everywhere she studied. While in Amsterdam she met and toured with internationally famed trumpeter Saskia Laroo and also came under the tutelage of drummer Nasheet Waits whose initial confidence inspired her to commit to a career in jazz and to seek out the opportunity to study in the United States. Since arriving in the US in 2010, Dorota has performed at Carnegie Hall with classical composer Bob Chilcott, Lincoln Center's Avery Fisher Hall with classical composer Will Todd in a piece conducted by famous Elena Sharkova and with jazz notables George Garzone, Jeremy Pelt, Lonnie Plaxico, Rory Stuart, Sam Newsome, Stacy Dilliard, Mike Rodriguez, Lafayette Harris, Benito Gonzales, Anthony Wonsey, Eric Wyatt, Greg Lewis, Carlo De Rosa, and The Curtis Brothers. In 2013 Ms. Piotrowska performed with her band and a special guest Jeremy Pelt at Jazz nad Odra Festival in Wroclaw, Poland. She has also participated in clinics led by Jeremy Pelt, another of mentors and appeared at Iridium, Smalls, Zinc Bar and Harlem's famed Lenox Lounge.

Dorota's music is an expression of her life experiences. Her parents are doctors but she chose to be a musician which to her is another way to heal people. She grew up partly on a farm where folkloric music was a daily reality. French chanson was introduced to her by her first French teacher. "I owe so much to Ms. Kujawiakowska who taught me to dream and be crazy enough to imagine that things are possible, that they can happen. She at 60, was so much more open-minded than I was at 16. I was inspired to live my life my way and my mum's love and support made it possible." Her studies with master drummers Kenny Washington, Ralph Peterson, Gregory Hutchinson and Nasheet Waits have led her to find new avenues to tell her story through collaborations with choreographers and poets.