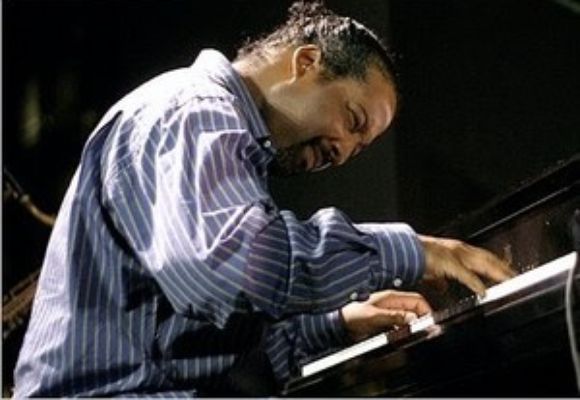 When you think of hard-driving swing, daring expression, sophistication and elegance in artistry, formidable technique and a thunderous sound, there are only a small handful of pianists you think of and one of them is most assuredly ERIC SCOTT REED.

Eric was born in the musically rich city of Philadelphia, PA. He grew up playing in his fathers storefront Baptist church: "My father was a minister who sang with a Gospel group called the Bay State Singers; he was my earliest musical influence. I was also hit heavily by everything I heard on the radio - James Cleveland, Edwin & Walter Hawkins, Andraé Crouch, Donny Hathaway, Earth, Wind & Fire. Soon after, young Reed was bitten by the Jazz bug after hearing recordings by Art Blakey, Ramsey Lewis and Dave Brubeck.

A child prodigy born with a God-given gift, Eric started playing piano at the age of two and began private studies by the age of seven at Settlement Music School. However, he remained primarily self-taught, often confounding his instructors not by learning the written music, but listening to them play it first and memorizing musical pieces note-for- note: "I wasnt interested in practicing Bach; I was too busy digging Horace Silver!"

By age eleven, his family moved to Los Angeles and he continued his formal instruction at the Colburn School (formerly the Community School of Performing Arts) where his theory teacher, finally realizing that Eric was destined for swinging, turned him onto more recordings of great Jazz pianists. His research continued via records discovered at his neighborhood library.

Soon, the word was spreading about this kid who is playing up a storm, and as a teenager he was already working with West Coast luminaries such as Buddy Collette, Teddy Edwards, Clora Bryant, Jeff & John Clayton. During his first year of matriculation at California State University at Northridge, he received a call from controversial trumpeter Wynton Marsalis to do a tour of the Midwest. Leaving college life behind, Eric began touring the world both as a leader and sideman, making serious waves in the music industry. He garnered great notice as a permanent member of Wynton Marsalis ensembles (1990-95), making countless recordings and TV appearances with him. He also worked in the bands of Freddie Hubbard and Joe Henderson (1991-92) after which his résumé would flourish with names such as Wayne Shorter, Jessye Norman, Patti Labelle, Edwin Hawkins, Quincy Jones, Natalie Cole and numerous others. Eric has recorded over twenty chart-topping, critically-acclaimed, award-winning projects, supported by global performances to appreciative audiences. Such accomplishments and hard work have not gone unnoticed by legendary pianist Ahmad Jamal, who has called Eric one of my very favorite pianists.

Beyond playing the piano, Reed expanded his scope to Hollywood, composing and arranging music for the Eddie Murphy comedy, Life, various other independent projects for Fantastic Four director and high-school chum Tim Story, plus commercials and TV spots. Annually, he serves as musical conductor for choreographer Alvin Aileys classic Revelations with the Alvin Ailey American Dance Theater, under the direction of Judith Jamison. An ardent educator, Eric served on the faculty of the prestigious Juilliard School of Music. He continues to perform worldwide master classes that cover the full spectrum of Jazz history and discography.

Eric's latest recording, THE DANCING MONK is a loving tribute to the late, great genius Thelonious Monk. About this project, Eric says, "Monk is one of the greatest jewels in the crown of American music. I am both honored and humbled to present his music in my own fashion."