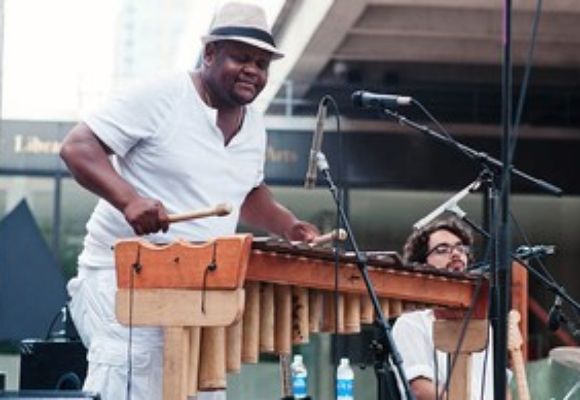 Diego Obregón was born on February 8, 1971 in Guapi, Colombia. He began playing Colombian percussion under the instruction of master marimba player Silvino Mina, as well as bass guitar with teacher Edison Antonio García (Taíncho). A few months after starting lessons, Diego joined Minas group as accompanist, and both joined the House of Culture band, where Diego played cununo next to Jose Antonio Torres, Leopoldo Lobaton and Antonio Banguera. Simultaneously, he played bass guitar for Grupo Nota.

transposed the sounds I was hearing to chonta wood, he says. People thought I was crazy, but that same day at sunset I managed to build the first octave, and as I was happily playing, people started to gather around me. They admired my creation, which encouraged me to keep going. I was now sure I could build the whole thing. Soon after, Diego hired somebody to find him good quality chonta wood, and thats where it all started.

Since his early days as a musician, Diego always hoped to play the marimba. However, due to financial constraints, he was not able to own one, so he vowed to build his own marimba. In February of 1994, after moving to La Tola, Nariño, Colombia, he found a dead chontaduro palm tree and decided to start building his instrument. I had no idea what I was doing, Diego says. His teacher told him about the sounds of the Bordón [Low register of the marimba] which were not traditionally pitched, so Diego decided to build something else. I took a guitar and

In 1995, Diego moved to Cali, Colombia, where he opened his own marimba shop. There werent a lot of people making marimbas in town, and the few who sold them only offered the traditional and purely folkloric versions of the instrument. He decided to build pitched marimbas, so that they could be used in ensemble with other tempered instruments. He also started looking for more firm materials to build the main structure, giving him better and more long-lasting results. For instance, he experimented by replacing the natural rubber at the tip of the mallets for other kinds of rubber, such as latex, which were easily found in the city.

Building pitched marimbas proved to be difficult for traditional manufacturers and musicians, but soon after, the pitched marimba was adopted by several players. The first Petronio Alvarez Festival, one of the most prestigious festivals of music from the pacific region of Colombia, didnt showcase any bands that included marimba in their format, and it was only due to the distribution of this new type of marimba that many bands started incorporating it into their ensembles. Nowadays it is very rare to see any bands not using marimba; it is a popular instrument that emerged from the countryside to the city. Diego says; That was my little contribution to the instrument.

Diego has been a member of multiple bands, including Raices Negras, Los Bogas del Pacífico, Colombia Viva, Pasos Por Colombia, Grupo Naydi, etc. He was also part of TEC (Cali Experimental Theater by its initials in spanish) in a play called El Guinnaru, directed by Enrique Buenaventura and Jackeline Vidal.

During the late 90s, Diego moved to Europe and eventually established himself in the Netherlands, where he spent a year and a half playing and spreading the sounds of music from the pacific region of Colombia. He then moved to the USA, where he founded his band Diego Obregón and Grupo Chonta with the purpose of introducing Colombian folklore and the music of his region. Soon after, Diego expressed an interest in recording original songs. For many years, he played live arrangements of traditional songs, but he hadnt written his own material, so he started composing his first originals, which now have grown to around 50 titles.

Selecting from the material he wrote, he produced and released his first album Pequeña Historia in December of 2012. Sadly, after leaving Guapi, he stopped playing percussion and bass guitar; however, the production of this album provided him with the opportunity to return to playing these instruments, as he did during the early years of his career as a musician. The release of Pequeña Historia was important for Diegos career because it allowed him to return to his roots.

Today, Diego is established in New York City and is now working on the production of his second album, which will be released in the near future.