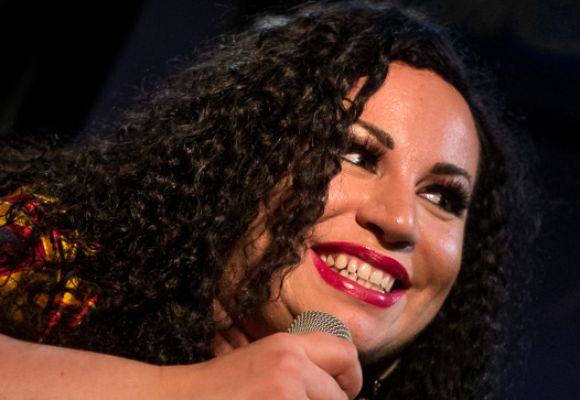 Hanka G is a New York-based jazz, world music, and gospel singer originally from Slovakia, growing up in Mongolian desert. Considered one of the most talented jazz singers of the present times with her vibrant, gospel-filled voice with the vocal power of a Mahalia Jackson, she is the rising star at the NYC jazz scene, fusing Slovak folk music with jazz & gospel and performing with her US Quartet all over the world. Hanka has won numerous jazz awards including "Jazz Man of the Year" 2017 in Slovakia. She was one of only two women to win this award in the last 26 years. Hanka has also been nominated for two Slovakian Grammys and has been acknowledged by her mentor Cassandra Wilson as "The Best of the Next Generation".

Born in Slovakia but raised in the Gobi Desert, she learned about American music from her father, while soaking in the native music of Mongolia. When Hanka returned to Slovakia, she became immersed in Slovakian folk music. Hanka's jazz group now tries to direct all these world influences through the lens of modern jazz.

With Cassandra Wilson’s support and representation by Ojah Media Group, Hanka moved to NYC under her sponsorship in August 2016. Currently, Hanka is actively performing in NYC jazz clubs such as Smalls Jazz Club with her own quartet - Anthony Wonsey - piano, Lonnie Plaxico - bass & Taru Alexander - drums. Besides being actively involved & performing at the NY Jazz scene, Hanka is also the guest lead singer for the Memorial Baptist Church in Harlem.

"She weaves her lush alto voice through any set of changes with grace and case. Her artistry demands to be heard." Melvin Smith, InConcert Magazine, USA

"The woman's voice is worth gold in all positions", Andreas Schiffmann for one of the most respected music portal in Germany,

"Just took time to listen to your “Twin Flame” CD. You have produced a beautiful product. I believe you have a brilliant career ahead of you. Glad to hear your music and sensitive lyrics.", Reggie Workman, USA - American avant-garde jazz & hard bob double bassist, recognized for his work with both John Coltrane and Art Blakey

"One of the most talented jazz singers of the present times. There are not many singers in Europe who truly embody jazz when they sing. Hanka is not trying to sing jazz - she comes by it naturally. Her vibrant, gospel-filled voice with the vocal power of a Mahalia Jackson expresses sorrow but also resolution." Jan Hocek, http://jazzport.cz, the most respected jazz portal in the Czech Republic

"The second album “Essence” presents a beautiful tribute to Slovak Folklore and is a classic example of what Jazz-World Fusion is all about and how it can be achieved successfully. Both the World music and Jazz idioms are given respectful and graceful treatment and are mixed with elegance and charm. Hanka has a warm, well-rounded voice that works both in the Jazz and the Folklore environment. Her phrasing on the Jazzy interpretations is simply superb. Overall this is an aesthetically pleasing and musically successful cross-genre project, which manages to be original, while respectfully presenting traditional folkloristic heritage.."Adam Baruch, Israel - one of the world's leading authorities in Jazz, a writer, critic, historian, researcher, teacher, broadcaster, discographer, photographer, concert and festival organizer, record producer, label owner, and a music activist. Adam founded the Israel Jazz Society (IJS) and was also active in establishing the European Jazz Federation (EJF), which later became the International Jazz Federation.