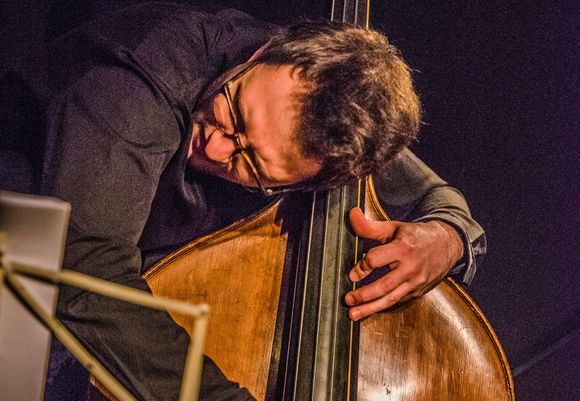 Myles Sloniker is a bassist and composer based in New York City. Equally at home in a multitude of styles from straight-ahead jazz to classical, folk, and experimental music, Sloniker has established himself as a prominent young voice even among New York’s fractured musical cliques, and has performed with a long list of eclectic musical luminaries including Ron Miles, Jeff Coffin, David Hazeltine, and David Amram, among others. Born to a musical family in Colorado, much of his early life was spent backstage—at his mother’s folk groups’ rehearsals, hearing his father perform with the Fort Collins symphony or in jazz clubs—music was everywhere.  Around the age of 11, Sloniker began to play the guitar and sing, but didn’t begin to pursue a career as a performer until his teenage years, when he was drawn to punk rock as a way to forge his own identity apart from his parents' paths.

As Sloniker’s musical tastes and ability continued to develop, he switched his focus to the upright bass, and began seriously performing alongside his father in jazz clubs and at festivals.  After a gap year spent on tour and in the studio, Sloniker enrolled at the University of Northern Colorado as a jazz bass performance major.  Already a seasoned veteran performer at the age of 18, Sloniker was practically a beginner when it came to reading music and his understanding of music theory.  Outside of school, Sloniker became an in-demand sideman and collaborator throughout Northern Colorado and at the age of 20, moved to New York City to attend the New School for Jazz and Contemporary Music.  There, his studies included private lessons with legendary bassist Ron Carter and composition lessons with Kirk Nurock.

Aside from his work in jazz circles, Sloniker has also been involved in collaborations with theatre and dance, most notably at the New York International Fringe Festival, and with artist and choreographer Nick Cave.