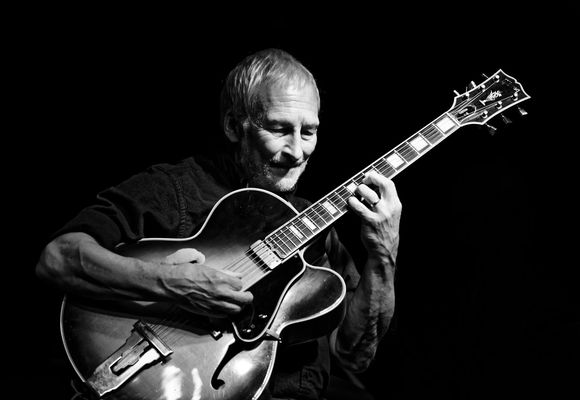 Jazz Guitarist Frank Kohl was born and raised in NY. Beginning his guitar journey at age eight. First influenced by rock and blues guitarists Like Johnny Winter, Jimi Hendrix, Eric Clapton. But it was his encounter with Wes Montgomery and the landmark Verve Recordings with Jimmy Smith, that set Kohl's sight on Jazz. Jim Hall, Joe Pass, Pat Martino, and George Benson cemented his commitment to the genre, as did his involvement in his award winning involvement high school Jazz big band. It was around this time that he saw the Tony Williams Lifetime with John McLaughlin and Larry Young. "My idea of what Jazz was forever changed", Kohl recalls, "I knew then that anything was possible in Jazz". At a young age Kohl also frequented a club called Rapsins, known for its legendary jam sessions with such cutting edge talents as Guitarist- Linc Chamberland, Bassist- Lyn Christie, Saxophonist - Dave Liebman. Kohl would go on to become Chamberlands student, and before long was sharing stages with veterans of the cohort.

Between 1972 and 1976 Kohl studied at Berllee College of Music during a golden age of the schools matriculation, when John Scofield and Pat Metheny were still students. After graduating with honors Kohl moved back to NY and continued performing, and writing original music. The result was Franks first Recording "Reform" with famed Bassist Michael Moore ( of Bill Evans and Dave Brubeck fame) In 1983 Kohl moved to San Francisco Bay Area and held an eight year stint with Vibraphonist Don McCaslins band Warmth. Kohl then moved to Seattle, where he has since become a fixture of the local scene and can be seen headlining The Earshot Jazz Festival, Tulas, Egans and The Jazz Station with such talents as Guitarist- John Stowell, Pianist- Bill Anchell, Bassist- Jeff Johnson, Drummer Matt Jorgenson. Frank regularly returns to NYC performing with Bassist -Steve LaSpina, Pianist- Tom Kohl and drummer Jon Doty. Franks fourth CD " Rising Tide" releasing 1/23/17 features this group.

Jazz Times said:  "He is set to be well recognized for his splendid composition and artistry. His talent and craftsmanship make him imenetly worthy of notoriety. His focus on the music instead of the musician make him a cherished artist".   Travis Rogers

Earshot Jazz Magazine said:     "His soaring solos and swinging tunes, unveil a spirit tuned into the moment and where the notes may lead. While Kohl has clearly mastered technique his solos ring true with room for breath and emotion"   Steve Griggs