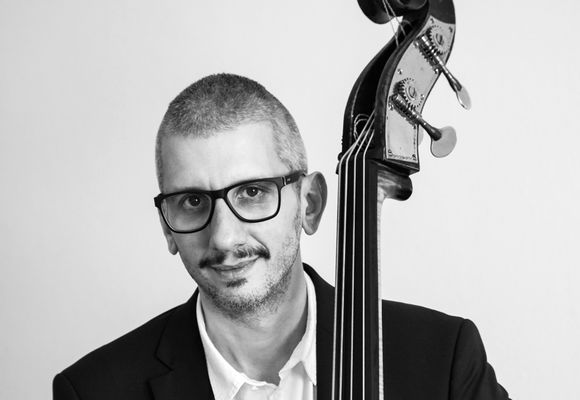 Paolo Benedettini is a New York based, Italian bass player.
Born in Pisa in 1977, he started to play guitar when he was 11, switching to double bass at 19. He attended master classes with Furio di Castri, Buster Williams, Barry Harris, Keter Betts, Wayne Dockery and took private lessons with Ron Carter.
He is part of the Italian jazz music scene since the late 90s, playing and recording with important musicians including: Jimmy Cobb, Curtis Fuller, Benny Golson, Eddie Henderson, George Cables, Eliot Zigmund, Keith Copeland, Jack Walrath, David Liebman, Steve Gut, Bud Shank, Steve Grossman, Ronnie Mathews, Harold Mabern, Lee Konitz, Benny Golson, Jimmy Lovelace, Gianni Basso, Jim Rotondi, Eric Alexander, Tom Kirkpatrick, and others.
From 2000 to 2002, he is been part of the Bobby Durham Trio (with Massimo Faraò on Piano) with whom he performed with soloists like Archie Shepp, Hal Singer, Grant Stewart, Shawnn Monteiro, Irio De Paula.
From 2009 to 2013 he is been part of the Nicola Conte Jazz Combo with whom he recorded an album for Impulse label and performed all over the world.
From 2013, he is part of the Jimmy Cobb Trio (with pianist Tadataka Unno) with whom he performed at the Village Vanguard in New York and he recorded at the legendary Rudy Van Gelder Studios, with Roy Hargrove as a special guest.
In 2013 he is also selected by the Juilliard School in New York as the only bass player for the prestigious free tuition program "Artist Diploma in Jazz Studies" which he completed in 2015, continuing his lessons with Ron Carter as part of the program.
He played in the most important clubs and festivals in Europe and performed in Japan, United States, Dubai, Hong Kong, Macao.
He graduated summa cum laude at the Musicology University of Bologna, with a thesis on the music of bassist Paul Chambers entitled: "Chambers' Music, Paul Chambers and the Role of the Double Bass in the Jazz of the Fifties".