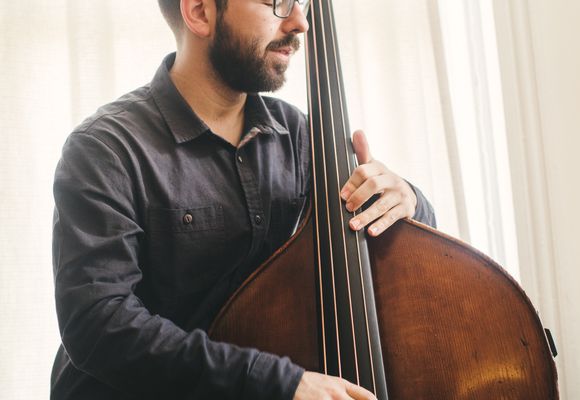 Born and raised in North Providence RI, Alex Tremblay found his passion in music at a young age. He came from a family of musicians which enabled him to hone his craft at a young age and would eventually lead him to further his studies at the Hartt School of Music at the University of Hartford, where he was a student of the schools renowned jazz department that was founded by the legendary Jazz Saxophonist/Composer, Jackie McLean. It was there that he met an studied with one of his bass heroes, Professor Nat Reeves. After completing his studies in 2013 he moved to New York City to continue to study, grow, and perform. Since moving to New York his most recent teachers have been Larry Grenadier and Gregg August. He currently resides in Brooklyn and is an active member of the music community in and around New York City. He has performed at many well known New York venues as well as venues abroad such as, The Blue Note, Jazz Standard, The Cotton Club (Tokyo), Jazz at Lincoln Center, The Iridium, BB King's, Minton's, The Cutting Room, Shanghai Jazz, The Kitano, Smoke Jazz Supper Club, Smalls Jazz Club, Fat Cat, Sleep No More, Bar Next Door, SubCulture, and Terra Blues. He has also performed with the likes of Jerry Dodgion, Bennie Wallace, Lew Tabackin, Jonathan Barber, Jovan Alexandre, Gary Smulyan, Johnny O' Neal, Larry Willis, Donald Vega, Pete Malinverni, Shawnn Monteiro, Steve Davis, Winard Harper, David Schnitter, Lawrence Clark, Philip Dizack, Jumaane Smith, Khalili Kwame Bell, Antoinette Montague, Josh Evans, Solomon Hicks, Highline Chamber Ensemble, Billy Drummond, Don Hahn, John Mosca, and Ralph LaLama.