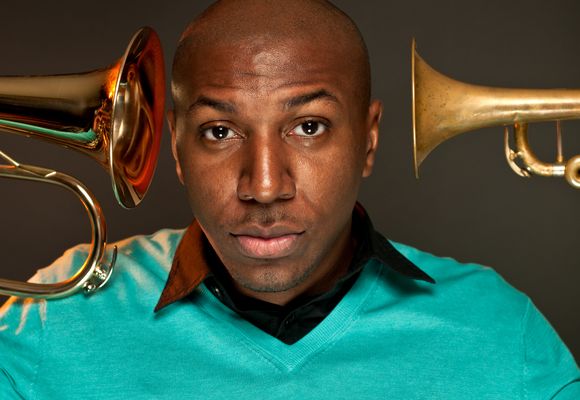 Kenyatta Beasley arrived in New York in 1994 to attend the prestigious Mannes School of Music where he received his Bachelor of Arts in Jazz composition and Performance. Earlier, (at the age of nine) Beasley’s precocious talent was evident when he was selected over 2,000 musicians to portray a young Louis Armstrong in the touring musical Satchmo: America’s Musical Legend. He later studied at the esteemed New Orleans Center for Creative Arts, whose alumni include Wynton and Branford Marsalis, Harry Connick, Jr. and Terence Blanchard.Blanchard was an early influence on Beasley who also wanted to venture into scoring for films. “I fell in love with the concept of film scoring after seeing Malcolm X. It was fascinating to me how music adds another character to the screen. One that is heard, but not seen.”

When not on the road, Beasley continued his education by receiving a Master’s degree in film composition from New York University’s Music Composition/Film Scoring program. “As musicians we have to diversify our portfolios. Performing is a part of me, but not all of who I am.” While at NYU, Kenyatta studied under the tutelage of Sonny Kompaneck (Three Kings, De-Lovely) and eventually composed the score for the short film Earnie, which won the NYU/New York Magazine First Run Film Festival award for Best Original Score and also was a finalist at Sundance. The success of Earnie caught the ear of Quincy Jones who hired him as a contributor to the underscore on Get Rich Or Die Tryin’. He then went on to win Best Original Score at theBrooklyn Arts Council Film Festival for another short film, Heroes Wanted. The trumpeter also composed the scores for other short filmsinclude Jeffrey’s Calypso, Dentist Visit, Heart Attack and the award-winning Pariah. His first solo, full-length film score was written for aVivica A. Fox film, Three Can Play That Game .He also returned to touring

on the Mary J. Blige/Jay-Z “Heart of the City” jaunt.

Beasley continued his evolution as both musician and educator when he took a position at Ohio State as a professor of Jazz Studies then a professor of audio production at Long Island University-Brooklyn. “Teaching the creation and production of music has made me realize that while most musicians are trained in how to perform music, they’re basically powerless in presenting the music through recording” says Beasley.  “Just playing an instrument well is half the battle. I’ve always had an interest in the technological side of music and production.”