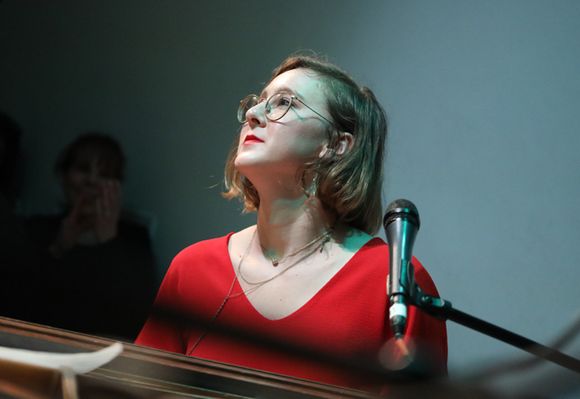 Kelly Green is an up and coming pianist vocalist who currently resides in Harlem, New York City. Born and raised in Florida, she began singing as a toddler and started piano lessons at age seven. At age eleven she became interested in jazz and began attending the Jamey Aebersold Jazz Workshop every year with her father, who is a professional bass player. Her senior year of high school she recorded and produced her own album of twelve original songs called “Aspire”.

She received her Bachelors in Jazz Studies- piano performance at the University of North Florida. She studied piano with accomplished jazz pianist, Lynne Arriale as well as voice with vocalist, Michelle Amato. She received the outstanding musician’s award her last three years at the University. While living in Jacksonville she performed weekly with her trio at the Ponte Vedra Lodge and Club. She also performed steadily at the Times Union Center, Lilly’s Coffee Shop, and Rhett’s Piano Bar as well as doing many private events at various locations. In May 2011, she competed in the Generation Next Youth Talent Competition at the Jacksonville Jazz Festival taking home first prize and a $2,000 savings bond for playing and singing Herbie Hancock’s “Eye of the Hurricane”.

In September 2012 she began attending William Paterson University where she received her Masters in Jazz Piano Performance. She took private lessons with acclaimed pianists Harold Mabern and James Weidman. She also had the privilege of taking a semester of arranging lessons with master Cecil Bridgewater and three semesters of classical piano lessons with the amazing pianist and educator Gary Kirkpatrick. While studying at William Paterson she performed in ensembles directed by the late master of the piano, Mulgrew Miller, as well as Bill Mobley, Rich Perry, and Bill Goodwin among many others. For her last two semesters he was the pianist in the William Paterson Jazz Orchestra led by head of the WP Jazz Department, Dr. David Demsey. In this band she had the opportunity to perform with NEA Jazz Master Jimmy Heath and legendary jazz vibraphonist Steve Nelson. Kelly also received the Outstanding Graduate Music Student Award for her class. In June 2014 Kelly was chosen to be the pianist in the William Paterson Colombia Band, which toured three cities in Colombia, South America. In Colombia, the band taught at two week long jazz clinics and performed at three large concert halls.

Although Kelly just moved to New York City about two years ago, she performs and hosts weekly jam sessions at Cleopatra's Needle on 92nd and Broadway. She also had a solo performance every Saturday at the 9th Note Jazz Club in Stamford, CT where she opened up for jazz legends such as George Coleman, Jimmy Cobb, and Louis Hayes among many others.

Kelly's latest project was recording her first jazz album featuring her originals and arrangments with her small group and her sextet featuring Christian McBride, Steve Nelson, Josh Evans, Noam Israeli, Tamir Shmerling, Jovan Alexandre, Matt Dwonszyk, Mike Troy, and Kush Abadey. She plans to release this record in 2017. With this album she strives to allow listeners to feel a sense of connectedness and relatability with the world, and seek comfort and relaxation in her music.

You can catch Kelly weekly with her trio hosting the jam session at Cleopatra's Needle Sunday nights 9pm-1am as well as at her other special performances in the city and the tri-state area. Please visit her website and follow her on social media for more information! @kellygreenpiano #kellygreenpiano www.kellygreenpiano.com