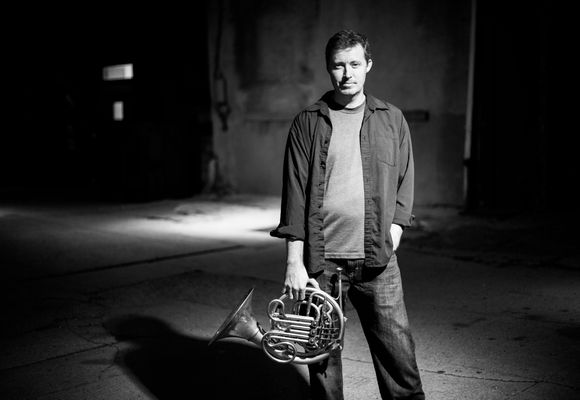 Justin Mullens in his work as an improvisor has innovated the approach of the French Horn.  He has been at the forefront of the development of that instrument as a vehicle of expression in the Jazz idiom.   Mullens has pushed the boundaries of the french horn as an improvising instrument,  borrowing technique and phrasing that is more in line with what one would here from a tenor sax or trumpet player, yet keeping the unique qualities of the rich sound of the french horn.

Over the span of his vibrant career, Justin has had the opportunity to play with many amazing artists such as:  Wallace Roney, David Sanborn, Bernie Worrell, Bootsy Collins, Steve Turre, Dizzy Gillespie, Chris Cheek, Ohad Talmor, Robby Ameen, and Tootie Heath.   As well as recording and performing with many groups as a sideman, Justin has also led and composed for his own projects including The Delphian Jazz Orchestra, The Justin Mullens Quintet, and more recently The Justin Mullens Octet.  Mullens has recorded two albums of his own with The Delphian Jazz Orchestra and one with his latest group The Justin Mullens Octet entitled The Cornucopiad under BJURecords.

Justin has also been featured often as a composer and has had his pieces performed in a wide spectrum of settings including commissions for film, dance, big bands, and chamber ensembles.

As a composer, Mullens is perseverant in his endeavor to break the formal confines of traditional jazz composition.  His writing brings an arresting mix of sounds, textures, and images to its audience. The mercurial innovations of this original music are brought to life by some of NYC's most illustrious musicians.