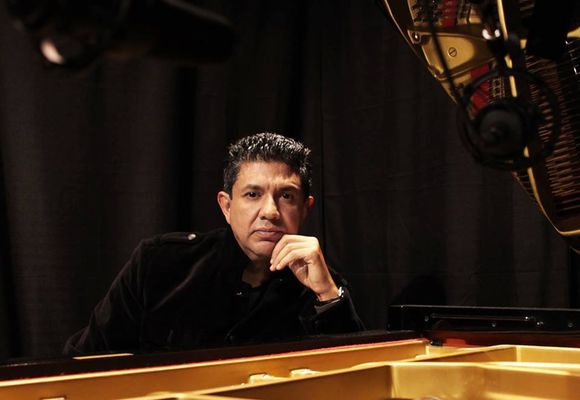 Pianist-composer Silvano Monasterios was born in Caracas, Venezuela. He spent his formative years of training at the Jose Angel Lamas Conservatory while he alternately encountered the great American jazz tradition in all its diversity. He promptly began his professional career at the age of 18, combining these influences by performing and recording with some of the most prominent Venezuelan artists of the time.

In 1989, Silvano traveled to Miami, Florida, to participate in the Miami Jazz Festival, where he received a “Best Soloist Award.”  By 1990, he had immigrated to the United States to make use of a scholarship from Miami-Dade College. More recognition followed with another “Outstanding Soloist Award” at the University of Colorado in 1991 and then a music scholarship from the University of Miami, from which he earned a Bachelor of Music degree in 1995. In 1998, Silvano was voted “New Artist of the Year” at the Hennessey Cognac Jazz Search in New York City, which led to a slot at the Playboy Jazz Festival where he engendered many new friends and fans.  This year also marked the release of his first CD, Roads Not Taken, prompting more critical interest in the U.S. and Latin America.

Never satisfied or stationary, Silvano next returned to the University of Miami in 2002 where he earned a Master’s degree in Jazz Piano and Pedagogy. DownBeat magazine honors followed in 2005 with the “Best Jazz Instrumental Soloist” award for the 28th Annual “Student Music Awards.”  An equally gifted composer, he also won in the category of “Original Song, Outstanding Performance” for his composition, “Avila”. This song was included in the follow up CD entitled Fostered.  In 2007, indie label Dogleg Music, released a live recording of the Wertico/Egan/Monasterios Trio including more original songs. A successive release, The Magician (Savant Records) by Latin Jazz Grammy Nominee Sammy Figueroa features performances, arrangements, production, and two Monasterios compositions including the title track. This album was nominated for the 2008 Grammy Awards as "Best Latin Jazz Album" and subsequently Miami New Times named Silvano as "Best Jazz Musician" in their Best of Miami issue. Ever prolific, the next Figueroa CD is set to be released in 2011 and features new Monasterios manuscripts.

True to his personality and insatiable appetite for challenge, Silvano has formed a new quintet which has just completed a recording of his latest exploration in the form of eight new compositions, entitled Unconditional. While this latest work is likely destined to be classified as “Latin Jazz” with its assortment of indigenous percussion instruments and rhythms, it is entirely devoid of Latin cliche'.  More precisely it showcases an artist with a complex understanding of his Venezuelan roots while steeped in the great American jazz tradition.

In 2015, Silvano relocated to New York City. Immediately after, he went back to the recording studio to work on his next record. Last summer, Savant Records released this brand new CD produced by Silvano entitled Party Sunny. This record includes nine beautiful compositions by Monasterios as well as the amazing artistry of Anat Cohen on clarinet, Troy Roberts on saxophones, Robert Quintero on percussion and Silvano’s long time collaborators Jonathan Dadurka on bass and Rodolfo Zuñiga on drums.