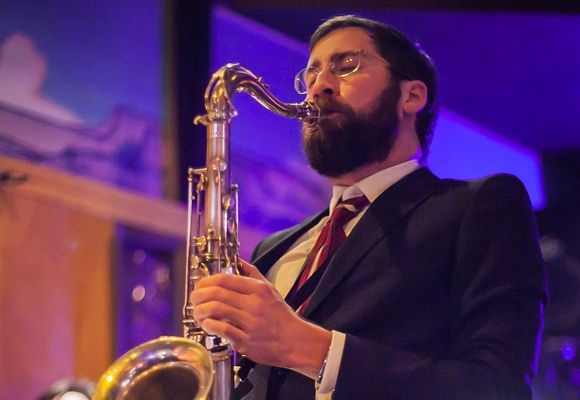 Patrick Wolff is a saxophonist, composer, educator, and radio host, originally from New York, and currently residing in San Francisco. His tone and phrasing display firm roots in the bebop tradition, but his style reflects a wide open approach to different eras of jazz and folk traditions from all corners of the world.

Wolff has studied with Ralph Lalama, George Garzone, Frank Foster, Ron McClure, and Frank Kimbrough. He has worked multiple generations of notable jazz musicians, including Shane Endsley, Tootie Heath, Grant Stewart, Ben Goldberg, Matt Wilson, Josh Roseman, Judi Silvano, Dena DeRose, and has toured heavily with the Glenn Miller Orchestra. Since relocating to the San Francisco Bay Area in 2009, Wolff has worked with many of the most exciting local bandleaders, including Graham Connah, Adam Shulman, and Andrew Speight, and has been a member and featured soloist with the Marcus Shelby Jazz Orchestra.

Wolff currently leads a trio with bassist John Wiitala and drummer Hamir Atwal, as well as a sextet with the same trio, trumpeter Erik Jekabson, pianist Adam Shulman, and clarinetist Ben Goldberg. Both groups perform his original music and can be seen in regular performance. The trio and sextet have recorded two records, Your Obedient Ghost and Noose of Light. During his time in NYC, he led a trio with bassist Chris Van Voorst Van Beest and drummer Yujiro Nakamura, performed regularly at clubs like the Bar Next Door and Louis 649, was an active member of the MTA’s Music Under New York program, and released a cd entitled Petals. He also leads the San Francisco Repertory Jazz Quartet with Adam Shulman, Eric Markowitz on bass, and Smith Dobson V on drums. The group explores obscure and underplayed bebop repertoire, and has released a cd entitled Go Down Swinging.

Wolff’s experiences as a sideman reach far beyond the jazz world. He collaborates regularly with singer/songwriter Diana Gameros and soul revue “OTIS.”  His first national tour was with punk band/comic troupe The Loose Nuts, and he had a 6 year run with Afro-beat/highlife juggernaut Asiko. He spent a year as a member of the seminal avant-garde compositional rock group Kayo Dot, and has performed with Nigerian reggae star Majek Fashek, fuji music legend Adewale Ayuba, and indie rock giants Calexico.

In addition to performing, Wolff has been on the faculty of the Stanford Jazz Workshop for 16 years, and hosts a weekly radio show on KCSM called "Have You Heard," in which he features emerging or underappreciated jazz artists.