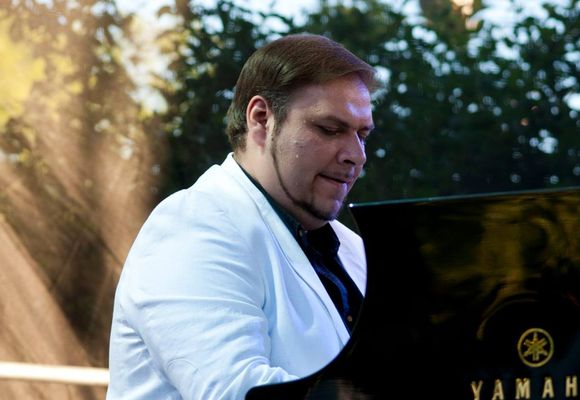 “For as long as I can remember, my greatest joy has been sitting at my piano and expressing my thoughts and feelings through the music I play” - Sorin Zlat

Zlat was born on May 7, 1985 to a family of accomplished musicians – his grandfather was a renowned violinist and conductor for the Romanian National Folkloric Ensemble; a position he held for decades. Zlat’s father is a professional jazz saxophonist.  Zlat grew up surrounded by the sound of classical and contemporary music.

At the age of seven, and continuing in his family’s tradition, he studied multiple instruments beginning with the violin and the clarinet. At the young age of thirteen he won the National Music Olympics and two years later was featured as a soloist with the Romanian Philharmonic Orchestra “Mihail Jora”. In 2009, he graduated from the George Enescu University of Arts with a degree in classical clarinet.

It was during those university years when he started to experiment with, and then fell completely in love with jazz. Beginning as an autodidact, his musical influences shifted to the work of Dizzy Gillespie, Keith Jarret, Miles Davis, Thelonious Monk, Bud Powell, Oscar Peterson, and Chick Corea. Zlat found the piano as the sublime instrument to reflect his innermost feelings as a composer and orchestrator. Zlat perfected his technical virtuosity in 2011 by earning a Master in Music Degree, the Piano Jazz Section, from the Romanian National University of Music.

Zlat’s style is a surprising fusion of jazz, Latin, pop and classical music, which erupts into a colorful and fascinating repertoire. His talent, revealed by his ability to find new dimensions to existing jazz standards and to create original compositions, gained him instant recognition on the jazz scene.

He was also the 2015 Nominee for the Public Diplomacy Award and Most Important People of Our Time (Oamenii Timpului), both in his home country of Romania.

In the summer of 2015, Zlat released his first album, entitled Endurance, a work centered on the power of love and family.  The project itself is an attestation to his progression as an artist and to his creative capabilities. The inspiration behind the album came to life with Zlat composing the song Roxane, which is dedicated to his younger sister.  His sister, that started battling cancer in 2011, became Zlat’s creative muse.  It was from the pain, suffering, and turmoil that arose from those events, that the song was born. Roxane, encompasses all of those emotions which are masterfully reflected in the melody. With influences from the Latin, flamenco, and classical music styles combined with jazz, each song on Endurance reaches new harmonic and rhythmic depths that leave a lasting impression with the audience. As an artist underwritten by the Romanian Cultural Institute, Zlat can be found performing in jazz clubs both in his country of Romania, as well as across Europe and North America.

o      Second Place and Prize of the Public Award

o      Special Prize of the Jury and Golden Jazz Trophy

o      Grand Prize and Prize of the Public