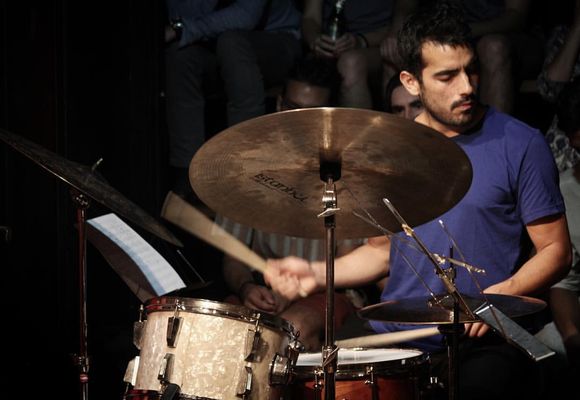 Few Chilean jazz musicians have at such a young age become soloists deemed as essential listening among their peers as drummer Félix Lecaros has since the beginning of the decade. He comes from a Chilean jazz dynasty of the highest order.

“The fact that Félix Lecaros is a member of ten jazz projects simultaneously can only
indicate two things: either this musician is a phenomenon or young jazz drummers are
scarce. The latter—no way. The drummer doesn’t exist who has never been surprised by
Lecaros on his drums at some point. Orlando Avendaño, the historic jazz drummer from the
60s and 70s recalls, “Seeing Félix put me in check. He has a perfect touch, advanced
technique, and fine-tunes the drums like I’ve never heard before. I think I'm going to take
classes with him.”
http://www.emol.com/especiales/jazz_chileno/lafamilialecaros_00.htm

“Few Chilean jazz soloists have become an obligatory reference among their peers as
quickly as drummer Felix Lecaros did in the early 2000s.” - Iñigo Díaz-
http://www.musicapopular.cl/3.0/index2.php?op=Artista&id=622