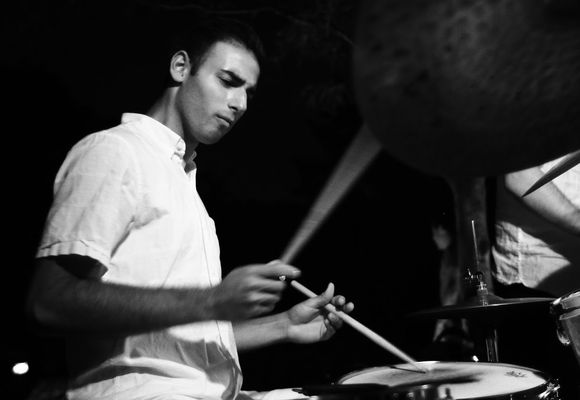 Marcello Carelli, drums, is majoring in Studio Music and Jazz at the Frost School of Music, where he is a Stamps Distinguished Ensemble Scholar, Class of 2021. Marcello is a member of the Stamps Jazz Quintet, directed by Chuck Bergeron. At the Frost School, Marcello has been a member of ensembles such as the Frost Concert Jazz Band and the Brian Lynch Artist Ensemble as only a sophomore. Originally from Bedford Hills, NY, he attended the Manhattan School of Music's Precollege Program with a concentration in both jazz and classical performance. There, he was awarded the D’Addario Scholarship and the MSM Jazz Scholarship for his exemplary talent and academic performance.  Marcello was a member of the New York All-State Jazz Band in 2016 in addition to performing in both the All-Eastern and All-National Jazz Ensembles in 2017.  He was recognized as a Young Arts Foundation Merit and Honorable Mention winner in Jazz in 2016 and 2017, as well as an Outstanding Soloist at the Berklee High School Jazz festival.

Marcello has worked and performed with many artists including Brian Lynch, John Daversa, Ira Sullivan, Andy Fusco, Walt Weiskopf, and many more. He has performed at the Umbria and Pescara Jazz Festivals in Italy, the Crescent City Jazz Festival in New Orleans, and the Monterey Jazz Festival. Marcello’s drumming influences include Art Blakey, Philly Joe Jones, Louis Hayes, Kenny Washington, and Greg Hutchinson. His parents are both performing artists, and he has been playing with his father’s jazz orchestra since he was eight years old. Marcello’s goals are to expand his knowledge of all styles of music and to share his love for music with other aspiring musicians. He is also a composer, as he wrote two of the compositions for the Stamps Jazz Quintet’s first album that was released this year.