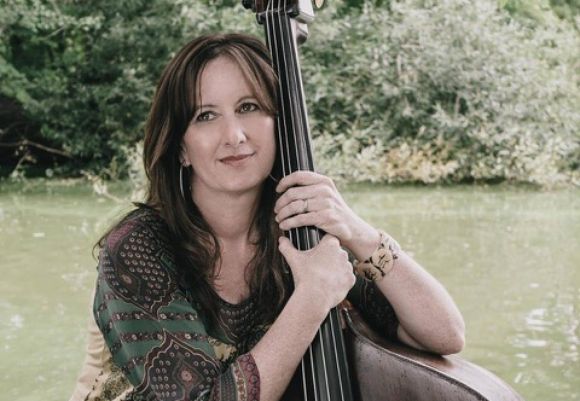 piano at the age of five and then began studying the violin at age 8. In high

perform at the Concord Jazz Festival. She was chosen to play at the

Brackeen and Lee Konitz, Gil Goldstein and Bucky Pizzarelli. She has also

Peplowski, Dennis Mackrel, Lewis Nash and Larry Goldings. She has

Williams Jazz Festival at the Kennedy Center. She has arranged for and

recorded with Warner Bros. Artist, Lea Delaria. She has toured Europe and

award winning vocalist Audra McDonald. Her orchestrations can be heard

“Avenue Q Swings” is available on itunes. Along with being full time

professional bassist in New York City, McSweeney is on the faculty for the

Workshop. She performed at the White House with the Eli Yamin Quintet

the Clayton/Hamilton Orchestra in May 2015. She was musical director/

Monheit.The program’s included selections from Irving Berlin and the Cole

Porter musical, “Anything Goes.” McSweeney performed at the Monterey

was rated in the top ten on jazz radio in the USA.