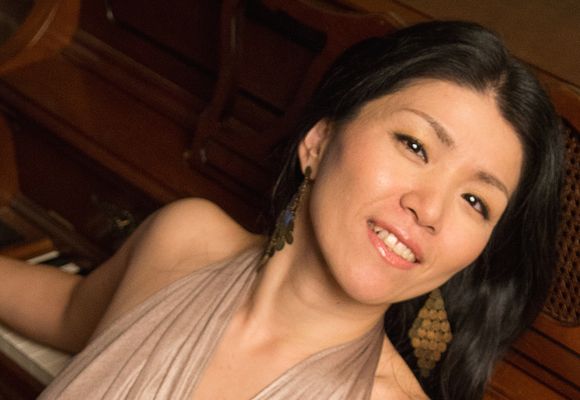 Japanese native, TAEKO moved to New York City from Shiga, Japan in the late 90’s and quickly garnered the nickname “Songbird” from the NYC jazz elite. With a stunning four octave range, she sings with “deep soulfulness reminiscent of Anita Baker with sophisticated scatting a la Ella” as jazz critics describe.

With a never ending stream of musical ideas and a fluid delivery that shows years of dedication in studying her craft, little is left to doubt how TAEKO has built a dedicated fan base in both the U.S. and overseas. Growing up in Japan, she was inspired early on by the traditional Japanese music her father and grandfather played, and has been singing as long as she can remember. TAEKO 's interest in American music was piqued while still a young child. In her formative musical years she counts traditional jazz, modern American music, and Eastern music among her influences in shaping her contemporary vocal style to this day.
TAEKO has graced the stages of some of the most heralded Jazz clubs on the East Coast, including, Birdland, The Kitano, the Zinc Bar, the Minton’s Playhouse, and the Blue Note. Additionally, she has been featured at such prominent U.S. festivals as the Cape May Jazz Festival, the Women in Jazz Festival in New York City, the United Philadelphia Jazz Festival, the North East Florida Jazz Festival, and Newburgh Jazz Series, in addition to her performances at numerous Jazz festivals in Japan. TAEKO was also a finalist in the 2008 NYC JazzMobile Jazz Vocal Competition.
TAEKO released her critically acclaimed third CD in the US “Wonderland” (Flat Nine Records), which features a “who’s who” of jazz heavy hitters.