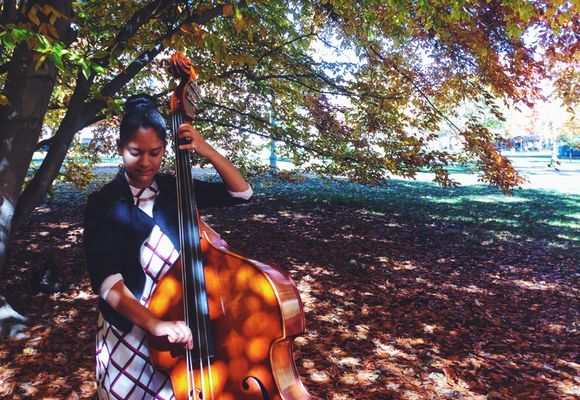 Liany Mateo, a 19 year old jazz bassist from Jersey City, NJ, has already studied and performed with some of the country’s top names in jazz. While in high school, she studied under renowned bassist Ben Wolfe. Through her involvement with the New Jersey Performing Arts "Jazz for Teens"program she has been able to work with vocalist, Jazzmeia Horn, saxophonists, Mark Gross and Wayne Escoffery, and drummer Alvester Garnett. Liany has received numerous honors as an aspiring jazz musician.  In 2016, she had the honor of performing with an all-star band that included drummer, Jerome Jennings and pianist, Benito Gonzalez in Newark, NJ, Sarah Vaughan’s hometown, during the U.S. Postal Service’s ceremony unveiling of the Sarah Vaughan Commemorative Stamp.  Notably, in 2015, she received the Governor of New Jersey’s Award in Arts Education, and was awarded the first place title in the Hudson County, New Jersey’s Solo Strings Competition.    Liany is currently studying with the legendary bassist, Rodney Whitaker at Michigan State University where she is pursuing a Bachelor's degree in Jazz Studies.