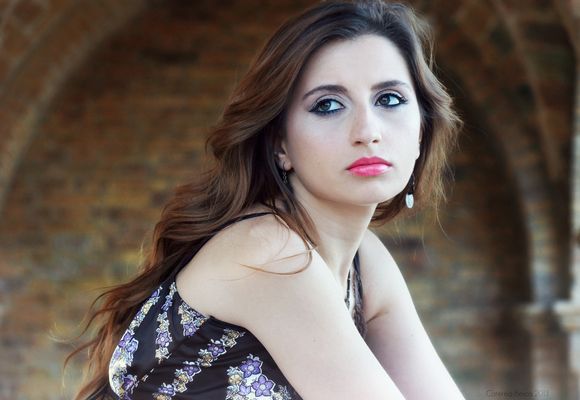 Award winning Italian singer, songwriter Chiara Izzi has been described by Jazz Times as “a talent to be heard, admired and anticipated” after the release of her debut album “Motifs”. She started her musical path in Italy by learning to play the piano and performing very early. Thanks to an unstoppable live activity in Italy and abroad (Belgium, Switzerland, France, United States, Finland, Germany) she reached a great versatility that made her capable to acquire a vocal mastery of jazz tradition but also a remarkable skill in contemporary styles. This way Chiara has developed a unique sound that allows her to interpret music gaining the musical content from different genres (jazz, pop, Mediterranean sounds) blending it and exploring it through a strong personality that unifies all the songs in a very brilliant and mature way of singing.

She is currently living in New York and performs regularly around the city, having had already the chance to perform in prominent jazzclubs and venues including Iridium, Apollo Theater, Smalls, Bar Next Door, with some of the finest musicians like Kevin Hays, Eliot Zigmund, Warren Wolf, Anthony Wonsey, Pat Bianchi, Yotam Silberstein, and she has caught the attention of and received remarkable appraisals from Quincy Jones, Bobby Watson, Benny Golson, Joel Frahm, Aaron Goldberg, David Kikosky, Greg Hutchinson, Jonathan Kreisberg, Dado Moroni and many others.

Chiara’s International debut took place at the Montreux Jazz Festival Vocal Competition in 2011, where she was awarded first prize by the living musical legend Quincy Jones. Following this award the vocalist was invited to perform at the Montreux Jazz Festival 2012 opening Paco de Lucìa’s concert. Thanks to this award she had also the chance to record her debut album “Motifs” released by the New York based label Dot Time Records. The record has been presented in some well-known radio programs in Belgium, Holland (Radio Jazz meeting by Cynthia Thijs Coenraad), Italy (at Radio 24 by Gegé Telesforo, at  RTL 102.5 Cool by Roberto Uggeri, at Rai Radio 1 by Max de Tomassi) and received notable reviews in the US on Jazz Times, All About Jazz, Midwest Record, to name of few. After a constant live activity on the Italian musical scene, on April 2014 she was invited to perform at the Jazzahead Festival (Germany).

She participated in some important International competitions such as Voicingers 2012 (Poland), where she was selected as a finalist by a jury composed by Patricia Barber, Lars Danielsson and Thierry Quenum. She has also won some of the most important Italian jazz competitions to name a few, first prize in the prestigious Italian contest Lucca Jazz Donna 2010, in Lucca (Italy), third prize in the national contest Chicco Bettinardi 2010 in Piacenza (Italy). In July 2009 she was in the band that won the first prize in the international competition Barga Jazz, in Barga (Italy). In 2008 Norma Winstone, David Linx and Maria Pia de Vito chose her as a finalist for the International Jazz Competition Scrivere in Jazz, in Sassari (Italy). Chiara graduated with honors from the Conservatory of Frosinone in 2012 with a Masterʼs Degree in Jazz Music.

“A talent to be heard, admired and anticipated” – Travis Rogers, Jazz Times

“She has developed a distinctly original vocal style and understands the feeling of jazz in a deep way. Her performances never fail to inspire and always elicit the very best out of her sidemen”. – Joel Frahm

“Motifs is her debut recording and immediately reveals a study, lightly-accented voice with a well-scrubbed sensual vitality that is fresh and crisp…Izzi joins as a force of nature with prodigious scat chops” – Michael Bailey, All About Jazz

“Having travelled to and performed in Italy for the last 35 years, I have met many Italian rising stars and have seen them to go on to achieve international recognition. Chiara is one of those rising stars that I speak of. She has the talent, passion, devotion, musicianship, and professionalism that is required for success”. – Bobby Watson