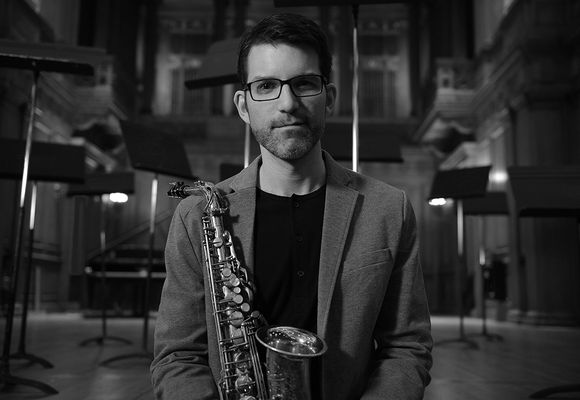 Kris Allen is an American saxophonist, composer and educator.

Born and raised in Connecticut, Kris began musical studies at an early age, but his desire to seriously pursue a life in jazz music was catalyzed through his apprenticeship with legendary alto saxophonist Jackie McLean, first at Hartford’s Artists Collective and later at the Hartt School of Music in McLean’s African American Music Degree Program.

He has performed throughout the US and worldwide, and forged a clear conceptual and aural identity as a composer, arranger, and bandleader to match his powerful saxophonic voice.  His latest release, Beloved, is his second album for the Truth Revolution Recording Collective.  In the company of his working band Allen calls upon the musical languages of not only McLean, but also notably Young, Parker, Mingus, Ellington, Powell, Rollins, Coltrane, Coleman and Kirkland to spin a unique sound narrative.

“Allen, in this triumphant follow-up release to his acclaimed debut disc, Circle House, for all of his fluency in the language of jazz and deep knowledge of the music’s modern masters, is very much his own man with his own creative voice.”-  WNPR.org.

Downbeat Magazine described Beloved as “one of the better new releases to come out this year…..locating the profound within the familiar”

Kris has enjoyed a long career as a sought-after sideman, working in the groups of Illinois Jacquet, Gerald Wilson, Andy Gonzales, Jimmy Greene, Helen Sung, Winard Harper, Andy Laverne, the Mingus Dynasty, Avery Sharpe, Andy Jaffe, Earl Macdonald, Noah Baerman, Jen Allen, Ike Sturm, Gary Smulyan, Jazzmeia Horn, Rogerio Boccato, Kendrick Oliver’s New Life Orchestra, the Curtis Brothers, Jonathan Barber and Mario Pavone among others.  Kris is a founding member of the collaborative Envisage Collective. As a composer, Kris has been honored with numerous awards, commissions and residencies, including a Macdowell Fellowship and a Connecticut Office of the Arts Fellowship )and has collaborated with dancers, poets, and visual artists, as well as musicians from across diverse genres.

A dedicated educator, Kris is the Lyell B. Clay Artist Artist-In-Residence in Jazz at Williams College, having previously held positions at the Hartt School, Trinity College, Southern Connecticut State University and the Greater Hartford Academy of the Arts. He has been a Teaching Artist for Litchfield Performing Arts since 2001, and conducted clinics and master classes at institutions nation and worldwide.

Kris is a Vandoren Artist and plays Vandoren mouthpieces, reeds and ligatures exclusively.