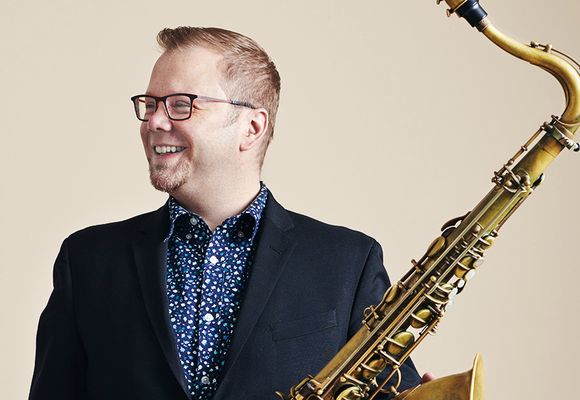 Saxophonist and composer Dan Pratt has been favored as “a powerful player” by Jazz Times, with the Birmingham Times elaborating that, “his style puts him above the rest, as he has a driving force that is unrivaled.” The PA Daily News added, “Pratt is an impressive tenor sax man. Seriously, Pratt's got energy to blow buildings down with his horn and a style that's so elastic he can wrap it all back up together again when he's done.” As a composer, Dan has been called “gifted,” whose compositions have been cited as being “mind blowing” (Birmingham Times), and “a true home run power hitter” (All Music Guide) whose “writing for a band is its principal asset.” (Master of a Small House)

Following two critically-acclaimed organ group outings, Dan heads in a new direction on Hymn for the Happy Man, his fourth recording overall and debut for his own Same Island Music imprint. The California native and longtime Brooklyn resident had never recorded a piano/bass/drums quartet record before, and he felt a need to explore this instrumentation that is such an essential strand to jazz’s DNA. On Hymn for the Happy Man, Dan is backed by the all-star rhythm section of Christian McBride on bass, Greg Hutchinson on drums, and Mike Eckroth on piano. Together, they realize seven well-crafted originals and breathe new life into one well-chosen standard. Look for its release on June 3rd.

In his professional tenure, Dan has been at home as a soloist and section member in some of the finest ensembles on the scene, having performed and recorded with such artists as Christian McBride, the Village Vanguard Orchestra, Dee Dee Bridgewater, Fantasia, and Usher, in venues from the House of Blues to the White House. He is a founding member of the Brooklyn Jazz Underground collective, and is a regular member of the Christian McBride Big Band, the David Smith Quintet, and the Tammy Scheffer Sextet.