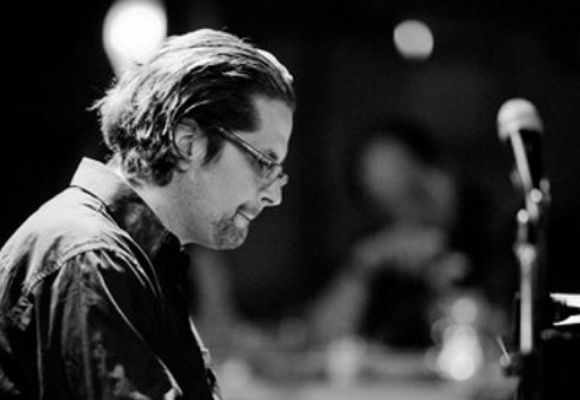 It's a Travis cyclone! Thunder-Travis! He has been called a "man of mystery" by JazzTimes, "pianist-in-exile" by Time Out New York, and although he has been highly praised by the likes of Tony Williams and Ahmad Jamal, remains largely unknown to the public. Shook is an acoustic jazz pianist—one who demonstrates an unusually wide scope of feeling from the simple to the complex, the conventional to the unconventional, and from the softest, most lush ballads, to the fiercest, hard-driving jazz. "It's all the same to me," Shook explains. "I don't distinguish between different moods—it's about nothing but the groove. That's why I put the same energy into a slow tune as a fast tune."

Born in Orville, California on March 10, 1969, Shook (who began studying the piano at the age of seven) moved to Olympia, Washington with his parents when he was ten and spent his adolescent years in the Pacific Northwest. Shook was never a jazz snob; he also appreciates rock and played some rock guitar growing up. But as a teen-ager, Shook fell in love with improvisation and realized that jazz piano would be his primary focus. Shook's pianistic influences have included Ahmad Jamal, McCoy Tyner, Duke Ellington, Harold Mabern, Herbie Hancock, and Bill Evans, and he also cites non-pianists like saxophonist John Coltrane, trumpeter Miles Davis, and drummer Elvin Jones as strong influences.

After graduating from Paterson in 1990 with a BA in jazz performance, Shook returned to Washington State and spent three years in the band of veteran bassist Buddy Catlett (famous for his work with Count Basie and Louis Armstrong, among others).

"Buddy took me under his wing," Shook recalls. "Working with Buddy Catlett was where I really got my grounding in the jazz tradition. I learned a lot about the history of jazz during that time. It was a valuable experience working with him at gigs in Seattle five nights a week for three years."

In 1991, a 22-year-old Shook won the Jacksonville Jazz Festival's Great American Piano Competition, which led to a contract with Columbia Records/Sony Music. And in 1993 - the year Shook moved to New York City - Columbia released his self-titled debut album, which boasted the late Tony Williams on drums, Bunky Green on alto sax and Ira Coleman on bass. The album, which Shook produced with Williams, received almost universal favorable reviews; in the All Music Guide, for example, well known jazz critic Scott Yanow initially gave Travis' debut a 5-star rating. In France, Jazz Magazine selected Shook's debut recording as one of the Best of 1993 and Nord Matin praised "At 22 years, he possesses an extraordinary technique.... Yes this Travis Shook is a phenomenon and it is clear that they will be talking about him."

But Shook's association with Columbia/Sony turned out to be short-lived. When Columbia's jazz department went through a major regime change and Dr. George Butler (who signed Shook and served as executive producer on his first album) lost his A&R power, Shook was dropped from the label along with Horace Silver, Joey DeFrancesco and others. In addition, a brutal attack on one of Shook's performances by controversial New York Times critic Peter Watrous insured that Shook would not be picked up by any other record labels, and live bookings became difficult as the review became quite well-known in the club and festival circuits. That setback, however, was soon followed by a major break: in 1994, jazz vocal innovator Betty Carter hired Shook as her pianist - and he ended up touring Europe extensively with her. The future looked promising for Shook, but not long after that European tour concluded, he disappeared from the public eye for several years.

In 1999, he and his wife, Veronica Nunn, started their own company, Full Gallop Entertainment, which includes his label, Dead Horse Records.  In February 2000, Shook and Nunn entered a Brooklyn studio and recorded an abundance of material that resulted in a trilogy of albums he has since released on Dead Horse: (1) Nunn's debut album, American Lullaby, (2) Shook's second album, Awake, which he produced, and (3) his third album, Travis Shook Plays Kurt Weill. In early 2007, Shook released Nunn's second and third albums, Standard Delivery and The Art of Michael Franks (which also feature him on piano), on Dead Horse. After more than a decade, in 2011, Shook again went into the studio to record and release a classic piano trio album, Travis Shook – Trio.

Reggie Workman, Eddie Harris, Joe Lovano, Toots Thielemans, Rufus Reid, Chuck Israels, Ernestine Anderson, Branford Marsalis, Benny Golson and Clifford Jordan are among the many jazz greats Shook has played with along the way. Shook's pianism has been praised by the likes of Ahmad Jamal, Ornette Coleman (who enthused, "Man, you're a really good player!"), George Benson, Sonny Simmons (who featured Shook on his Quest/Warner Bros. release American Jungle) and the late Michael Brecker. Travis is also not afraid to step out and play outside the straight-ahead box, having played with the likes of Michael Franks, Gino Vanelli, Bob Hope and Chris Botti. He was also sought out by the legendary Marian McPartland to be a featured guest on her critically acclaimed radio show, Piano Jazz.

In the future, Shook plans to keep building Dead Horse's catalog. One possible project is an album of jazz arrangements of compositions by Viennese classical composer Johann Strauss, Jr.; another is a tribute to 1920s/1930s cornetist Bix Beiderbecke. But whatever he records, Shook is adamant about one thing: it will always be coming from an honest place, and it will always underscore his individuality as a pianist.

"Whether I'm going to record a standard or one of my own compositions," Shook asserts, "it has to be from my perspective. Even if I'm going to record something that has been recorded by hundreds of artists, I need to add something different and shed some kind of new light on it. It doesn't need to be something eccentric or radical, but it does need to reflect my own viewpoint. That's my way of giving to people - it's the best way I know how."

"He has well earned the prize 'Special Discovery' . . . At 22 years, he possesses an extraordinary technique, one can also speak of his knowledge, but especially he frees himself in his playing with an exceptional intensity that he also shows in his own compositions . . . Yes this Travis Shook is a phenomenon and it is clear that they will be talking about him." (Nord Matin)

"Among the super talented, Travis Shook, who has opened the umbrella, can be an exceptional figure." (Philippe Méziat, Jazz Mag)

"Under his appearance of a student with glasses, Shook is a supreme pianist by his maturity, his assurance, his irresistible punch and the electricity that frees itself from his playing." (Par Henri Marchal, Cannes)