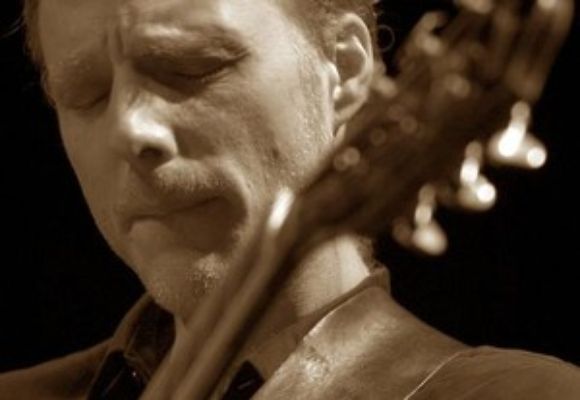 Having played with everyone from jazz greats Paul Motian, Joey Baron, Carla Bley and Dave Douglas to oud/violin virtuoso Simon Shaheen and Yuri Yunakov's Bulgarian Wedding Band, Brad Shepik is one of the most versatile yet distinctive guitarists of his generation.

Born in Walla Walla, Washington and raised in Seattle, Brad Shepik began playing guitar at age 10, when he picked up his father's instrument. He continued to play both guitar and saxophone in school bands and studied guitar with Al Galante and Dave Petersen. He earned a B.F.A from Cornish College of the Arts and a Masters in Jazz Performance/Composition from New York University.

Since arriving in New York in 1990, Shepik has been involved several ensembles including Dave Douglas' Tiny Bell Trio, Matt Darriau's Paradox Trio, Pachora w/Chris Speed, Jim Black and Skuli Sverrisson, and BABKAS. He has also performed with Carla Bley's Escalator Over the Hill, Charlie Haden's Liberation Orchestra and toured and recorded with Paul Motian's Electric Bebop Band for 5 years. Concurrently, the guitarist extended his knowledge of world music idioms by performing and recording in such groups as Yuri Yunakov's Bulgarian Wedding Band and Simon Shaheen's Quantara. Shepik's first two records as a leader, The Loan and The Well, were praised for their marriage of world music styles and jazz.

Currently Shepik is writing a 12 part suite for jazz quintet titled Human Activity  Sounding a Response to Climate Change. It will feature Shepik on guitars, saz and tambura as well as Ralph Alessi (trumpet), Gary Versace (piano, organ, accordion), Drew Gress (bass) and Tom Rainey (drums). The piece will be premiered June 11 and 12, 2008 in New York. Human Activity will be recorded in June 2008 for Songlines Records.