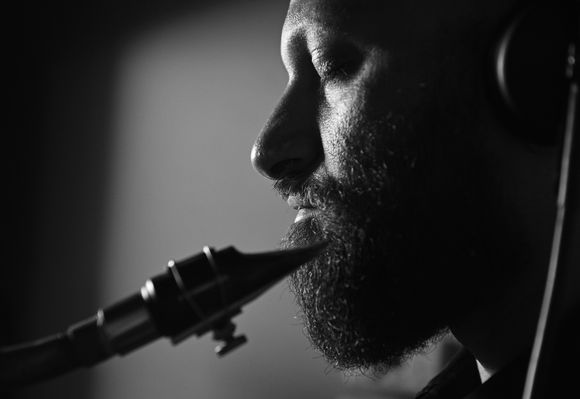 As described by the legendary Herbie Hancock, Eli Degibri (el-ee deh-jeeb-ree) "is a very talented composer, arranger, and performer whose music treads uncharted waters." Known for his charismatic performances and compositions, Degibri’s immense talents were earned, molded and burnished from years of sharing stages as an integral member of Hancock’s sextet (1999-2002) as well as the iconic Al Foster’s band (2002-2011), and leading bands consisting of musicians Brad Mehldau, Ron Carter, Ben Street and Kurt Rosenwinkel, resulting in seven critically-acclaimed recordings under his name. His latest album, Cliff Hangin’, was given a perfect 5-star review from DownBeat Magazine, praising Degibri’s “virtuosic melodic purity” and recognizing the album as a masterpiece. He is currently working on his next release, a special tribute to legendary saxophonist and one of Degibri’s first inspirations, Hank Mobley.

"a bewitching fellow who shows impressive chops, as both a player and a composer." (Karl Stark, The Philadelphia Inquirer).

"The only young saxophonist that his playing gives me joy." (Al Foster, Drummer)

"Don’t miss him.  He is a very modern improviser, super-artful; his creations are spiky and fractured, but immaculately sculptured." (Ben Ratliff, The New York Times)