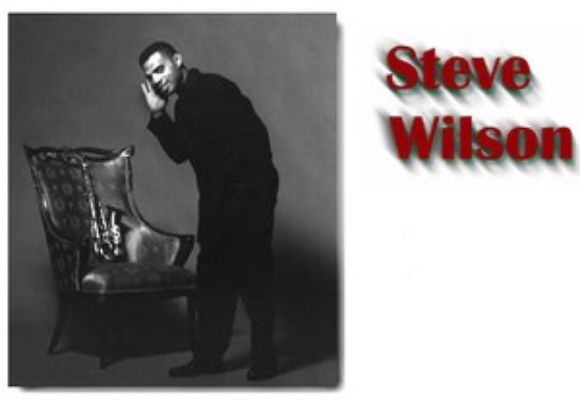 "...one of the most gifted young woodwind specialists on the modern scene.

His intellectual approach and studied chops are coupled with a deep spiritual base and driving creativity."

"Adept in almost any setting, Wilson has the rare ability to say more with less

and to let the space between each note breathe and resonate."

These are some of the qualities that have earned STEVE WILSON a prominent position on the bandstand and in the studio with the greatest names in jazz, as well as critical acclaim as a bandleader in his own right. A musician's musician, Wilson has brought his distinctive sound to more than 100 recordings led by such celebrated and wide-ranging artists as Chick Corea, George Duke, Michael Brecker, Dave Holland, Dianne Reeves, Bill Bruford, Gerald Wilson, Maria Schneider, Joe Henderson, Charlie Byrd, Billy Childs, Karrin Allyson, Don Byron, Bill Stewart, James Williams, and Mulgrew Miller among many others. Wilson has seven recordings under his own name, leading and collaborating with such stellar musicians as Lewis Nash, Carl Allen, Steve Nelson, Cyrus Chestnut, Greg Hutchinson, Dennis Irwin, James Genus, Larry Grenadier, Ray Drummond, Ben Riley, and Nicholas Payton.

A native of Hampton, Virginia, Wilson began his formal training at age 12. Playing saxophone, oboe, and drums in school bands, he also played in various R&B and funk bands throughout his teens, and went on to a year-long stint with singer Stephanie Mills. He then decided to major in music at Virginia Commonwealth University in Richmond, affording him opportunities to perform and/or study with Jimmy and Percy Heath, Jon Hendricks, Jaki Byard, John Hicks, Frank Foster and Ellis Marsalis. In 1986, he landed a chair with O.T.B (Out of the Blue), a sextet of promising young players recording on Blue Note Records. In 1987 he moved to New York and the following year toured the US and Europe with Lionel Hampton. Becoming a first-call choice for veteran and emerging artists alike, Wilson was the subject of a New York Times profile "A Sideman's Life", highlighting his work with Ralph Peterson, Jr., Michele Rosewoman, Renee Rosnes, Marvin "Smitty" Smith, Joanne Brackeen, The American Jazz Orchestra, The Mingus Big Band, The Smithsonian Jazz Masterworks Orchestra, Leon Parker, and Buster Williams' Quintet "Something More". In 1996 he joined the acclaimed Dave Holland Quintet, and from 1998-2001 he was a member of Chick Corea's Grammy winning sextet "Origin".

Having been cited by his peers in a New York Times poll as one of the artists most likely to break out [on his own] as an established leader, Wilson recorded four CDs (New York Summit, Step Lively, Blues for Marcus and Four For Time) on the Criss Cross label. He then debuted on Stretch Records with Generations, his multi-generational quartet with Mulgrew Miller, Ray Drummond and Ben Riley. His second Stretch release Passages features his working quartet-Bruce Barth, Ed Howard and Adam Cruz, and special guest Nicholas Payton. Containing nine original compositions Passages established Wilson as a leader whose vision reveres the past, creates a soundscape of the present, and reaches toward the future.

Wilson's most recent recording Soulful Song, was released by MAXJAZZ in June 2003. It features his quartet and special guests Rene Marie, Carla Cook, Phillip Manuel, James Genus, Billy Kilson, Paul Bollenback and Wilson "Chembo" Corniel. The recording, which is the debut of the MAXJAZZ horn series, issues forth a powerful and provocative performance from these dynamic and versatile artists. As Wilson explains, "It's a tribute Black radio, as it was called then, that was particularly inclusive in its programming and a galvanizing force in the community. On the same station one could hear R&B, jazz, blues, gospel, comedy, local news and affairs, and social commentary". In addition to new original material the program includes songs by Stevie Wonder, Chick Corea, Abbey Lincoln, Gil Scott Heron, Earth, Wind & Fire, Patrice Rushen, and The Staple Singers.

Wilson was a featured guest with Dr. Billy Taylor in his series "Jazz at the Kennedy Center" which is broadcast on NPR. He was artistic consultant to Harvey Keitel for the film "Lulu On The Bridge" as well as being featured on the soundtrack. He has been Artist-In-Residence at The University of North Carolina at Chapel Hill, Hamilton College, Old Dominion University, and for the 2002/2003 season with the award winning arts organization CITYFOLK in Dayton, Ohio which included the performance of a commissioned work. He has been a featured performer, panelist, and clinician at conferences of the International Association of Jazz Educators, Association of Performing Arts Presenters, and Chamber Music of America. Wilson was honored with the Marc Crawford Jazz Educator Award from New York University in 2001, and the Virginia Jazz Award 2003 Musician of the Year presented by the Richmond Jazz Society, recognizing his outstanding service in the advancement of jazz and education in their respective communities. Since 1997 he has been regularly cited in the Downbeat Magazine Critics and Readers Polls in the soprano and alto saxophone categories.

Wilson continues to tour with the Steve Wilson Quartet and Generations. He performs in duo with his long-time friend and colleague Lewis Nash, in Musical Dialogue with Lewis Nash and Steve Wilson. He is also a touring member of the Grammy winning Maria Schneider Jazz Orchestra, The Buster Williams Quartet, and Mulgrew Miller's Wingspan, and is on the faculty at The Manhattan School of Music, SUNY Purchase, and Columbia University.