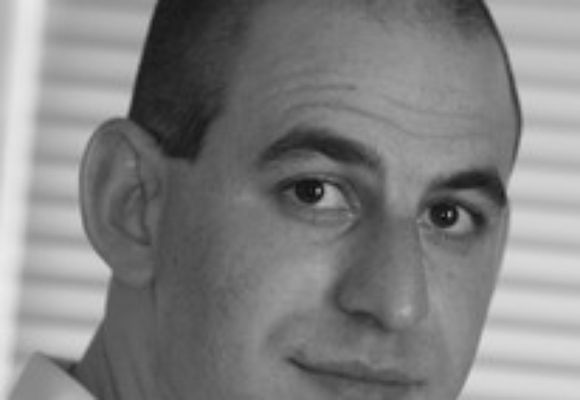 Composer/pianist Ezra Weiss was born on January 16, 1979, in Phoenix, Arizona.

There, he was active in community theater, both as an actor and a musical

director. He was also involved in band programs, and studied piano with Larry

Loeber. After graduating from Saguaro High School in Scottsdale, Ezra moved to

Ohio to study at the Oberlin Conservatory of Music.

At Oberlin, Ezra studied composition with Wendell Logan and piano with Neal

Creque. During his senior year, Ezra formed the jazz sextet Blues Connotation. In

2001, he received a Bachelor of Music in Jazz Composition and moved to

In Portland, Ezra continued to lead Blues Connotation, which later became the

University Jazz Camp, and the Northwest Children's Theater, where he musical

In 2002, Ezra flew to New York City for a week to record his debut CD, The Five

The Five A.M. Strut received great attention from the press and spent time on both

others. He has also performed with many great musicians including Greg Bandy,

Ezra has led bands in many of the U.S.'s greatest clubs, including Dizzy's Club

Coca-Cola, Smalls, and Tonic in New York City; Ryles in Boston; NightTown in

Mak's in Portland; and Catalina's in Los Angeles.

In 2004, Ezra moved to New York City to pursue a Masters in Jazz Piano at Queens

College. There, he studied piano with Bruce Barth and Ted Rosenthal. After

graduating, he taught for a year at Scottsdale Community College. Ezra currently

lives in Portland, Oregon, where he teaches at the Northwest Childrens Theater

and at Portland State University.