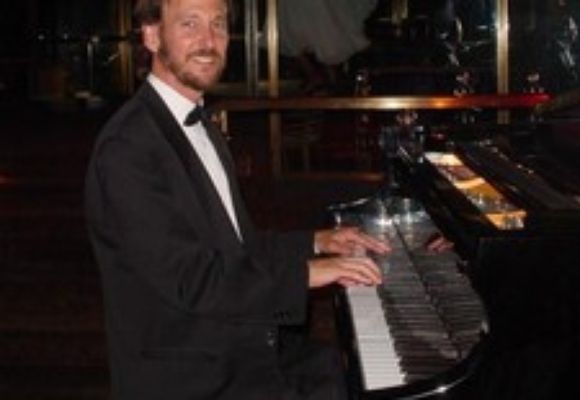 Born in a small coal mining town, Keith combines the ability to play I Cover the Waterfront in 11 and a half keys with his love of washing machines to form a perspective so skewed that his wife insists on seperate seatings at dinner.

Keith Saunders spent his formative years in Los Angeles where he studied with Charlie Shoemake and later, with Horace Silver. Keith worked extensively in L.A. with such well known artists as Eddie Harris, Roy McCurdy, and Bill Watrous, as well as recording with Dick Berk's Jazz Adoption Agency, for which he was the arranger. His most notable contribution to this aggregation was his composition "Forced To Hang," a song depicting the angst of being baracaded in a Dennys booth by an unyielding Berk.

Since moving to New York City in 1984, Keith has worked and/or recorded with a wide variety of musicians, including Richie Cole, Joe Lovano, Ralph Lalama, Hank Crawford, and Richie Vitale. In 1991, Keith became the leader of The HardBop Quintet, which had begun as a cooperative unit. The band toured the U.S. several times, as well as Europe and Japan, and recorded 4 CDs for the TCB label. Keith wrote and arranged music -- recorded by The HBQ -- for numerous television spots including promotions for VH1, ESPN, and Filene's Basement Department Stores. Perhaps this is where his love of washing machine and other household implements germinated.

Keith is also the Musical Director for Manhattan Tap, the nationally acclaimed tap dance company. It was in this period where his famous live Toronto Airport rendition of "People" led to his first arrest and conviction.

In addition to his recordings with The HBQ, Keith can be heard on Jerry Weldon's live-recorded Midtown Blues (Amosaya), John Dooley's Just Passin' Through, Tony Francis' Nice n' Easy, and Olga Boatman's Swingin down the Ukraine.

Keith lives in Queens, New York with his wife Debra and his three children, Little Jake, Leevin Von Cleefe, and Lucy McGuillicutty, where he continues to gig, teach, and engage in his favorite sport -- the shotput.