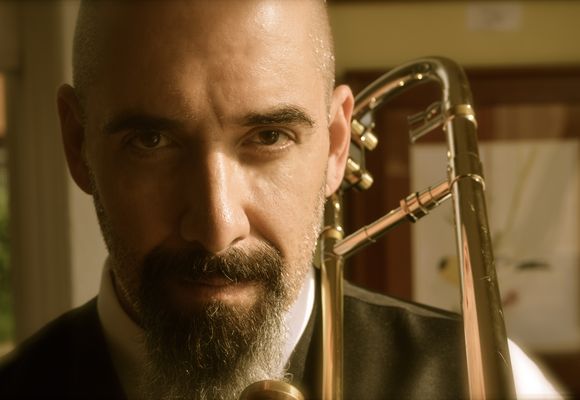 up the trombone and attending West Virginia University for

music studies. In Morgantown West Virginia in the early 1990s

Watkins was a band member and apprentice to bassist,

composer, and band leader Kevin Frieson. After moving to

Pittsburgh he began playing with many musicians including

trumpeter and band leader Maynard Ferguson. During his

tenure with Ferguson as trombonist, arranger and musical

director he played and recorded extensively for more than six

Watkins was selected as a semi-finalist for the 2003

Maynard Ferguson Presents Series. In 2010 he released his

In 2008 Watkins joined the band of GrammyAward winner and

singer-songwriter Jason Mraz to tour the world and record

extensively for over six years.

2018 brought a once in a lifetime experience when he was

the many musicians, activists, entertainers and friends of The

Queen of Soul to celebrate her life.

founding member of The Keystone Jazz Collective and a

Jukebox. He is the founder and frontman of the the Pittsburgh

based horn section and band The Steeltown Horns.