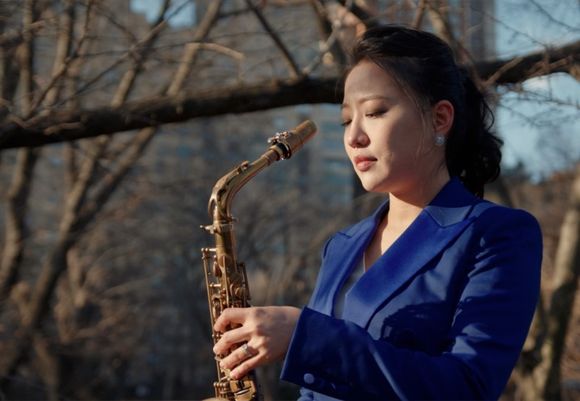 Pureum Jin is a South Korea-born, NYC-based saxophonist, arranger, and composer, actively expanding her presence in NYC as she recently released her first studio album entitled ‘The Real Blue’ with Cellar Live in June 21st. Although new in NYC scene, as she moved to the US in ‘15 for her studies, she has been building her brand as a notable jazz icon in both Korea and international scene. She has been staging in major international jazz festivals as a leader and a sideman including Edinburgh Jazz & Blues Festival (Scotland, ‘12), Takatsuki Jazz Street (Japan, ‘10), Seoul Jazz Festival (Korea, ‘13), Jarasum International Jazz Festival (Korea, ‘09-’14), and Jazz Korea Festival (Germany ‘12 and ‘13), DC Jazz Fest (US, ‘18), GREC Music Festival (Spain, ‘18) just to name a few. She was a selected as a rising star by prestige Korean jazz magazine ‘Jazz People’ in ‘12, and made one of the finalist in Jarasum International Jazz Concours in the same year. Recently, she was selected as one of the finalists to the Made in New York jazz competition ‘18. She has a live album as a leader from her tour in Europe released through Nagel-Heyer in ’13 and has another album to be released autumn ’19 with a Spanish maestro Ignasi Terraza through SWIT Music, from their live performance in Barcelona in ‘18. She holds a Master of Music in jazz performance from Manhattan School of Music (‘17), and a Bachelor of Music in Postmodern music from Kyung Hee University (‘08).