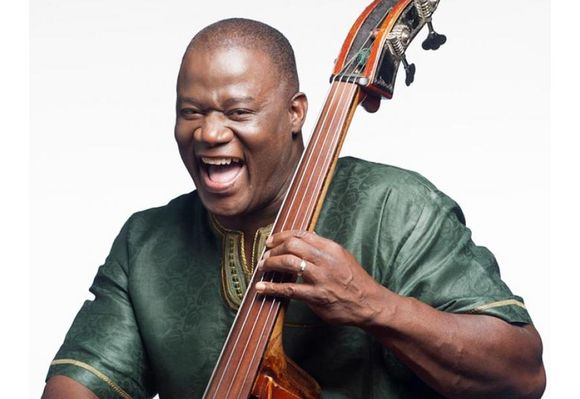 In 2017, Steve released his first full length orchestral recording featuring all of his own compositions, entitled “All Over The Map.” It has been described as “impassioned and transformative” and has cemented him as a prolific composer and orchestrator:

“All Over the Map introduces the fresh and adventurous sound of Steve Kirby’s Oceanic Jazz Orchestra (OJO).  Led by composer and jazz bassist Steve Kirby, OJO is a hybrid jazz-classical ensemble, with instruments like bassoon, oboe, pedal steel, and classical violin folded in alongside vibes, trumpet, saxophone, flute, and vocals. The compositions are equally far-ranging in their rhythmic and structural qualities, borrowing from jazz, folk, rock, hip hop, baroque, French impressionist, electronic, and tango.

All Over the Map is hard to capture in words. Think of it as a suite of postcards, or a collection of cultural fingerprints, from various locations along the line that stretches from the southern tip of Argentina to the frozen reaches of Nunavut. This vertical line across the map informs the working title of the suite of compositions: The Longitude Project. Every composition is distinct in style and structure, and they range in tone from seduction to rage to stubborn hope. Paradoxically, all the discrete parts cohere because ultimately the album is an exploration of the challenge and richness of being alive, of the deep humanity we all share, no matter where we live and how different our customs and cultures.”

“Steve Kirby IS A BADASS. Every once in a while a project comes in that just blows me away. This was the 2016 project. It is an amazing record on so many levels. It moved me.” Mark Wilder, Sony Music recording engineer

“Steve Kirby, like an alchemist, brews all these ingredients together and concocts listening universes that are both intellectually stimulating and musically pleasing, for both specialized and secular ears” Fredric Cardin, ICI Musique

Steve has appeared on many recordings as a side man and two others as a leader: Wicked Grin and Stepchild, featuring the University of Manitoba Jazz Faculty Ensemble. After 15 years at the helm of the University of Manitoba Jazz Studies program, Steve Kirby is retired and happy to now be devoting himself to his career as a full-time performer, composer and recording artist.

Steve and his wife Anna-Lisa have been making music together for over 25 years and this will be their debut performance together at Smalls Jazz Club!