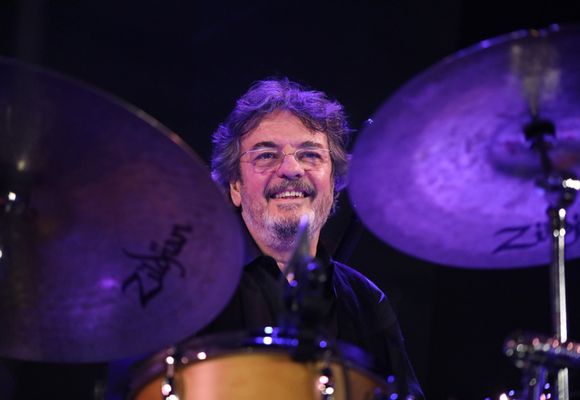 Born in Rio de Janeiro, Duduka Da Fonseca is a 3-time GRAMMY Award Nominee Drummer. He has appeared on over 200 albums alongside American Jazz icons as well as Brazilian Jazz Icons, making him one of the most recorded Brazilian drummers in this idiom.

In 2002 Duduka's first solo album, Samba Jazz Fantasia, was nominated for the American Grammy® Award. He is one of the very few Brazilians and the only Brazilian drummer thus far to be nominated for this prestigious Award.

In 2009 The Brazilian Trio’s (which he co-leads) album Forests, was nominated for the 10th Latin Grammy.

Duduka was a founding member and co-leader of Trio da Paz, nominated for an Indie Award as Best Latin Jazz Group in 1993 and their recording Partido Out won the Jazz Journalists Association Awards for best Brazilian Jazz Album of 2002.

In 2016, Trio da Paz won the Hot House NYC Award for the best group and was nominated for the American Grammy® in the Best Latin Jazz category with their most recent album “30”.

From 1984 to 2000 Duduka was a faculty member of the Drummers Collective NYC, conducting workshops and giving private lessons. He has also conducted workshops and master classes in Brazil, Europe and Asia. Duduka is the author of the bestselling instructional book and CD, Brazilian Rhythms for Drumset (Alfred Publishing Co, Inc).

The Quintet recorded two critically acclaimed albums. Their second album “Samba Jazz-Jazz Samba” was among the ten best albums of the year in the prestigious Jazziz Magazine. The Quintet actively performed on several places including the Umbria Jazz Festival and Tudo é Jazz Festival in Ouro Prêto.

Since 2007, Duduka Da Fonseca has had a project with pianist Helio Alves, featuring vocalist Maucha Adnet, called “Samba Jazz & The Music of Jobim”. This show has been presented annually at Dizzy’s Club Coca Cola (JALC), as well as other venues and festivals around the globe.

In 2009 Duduka formed his Brazilian based Duduka Da Fonseca Trio, what he considers to be one of his most expressive works to date, featuring David Feldman on piano and Guto Wirtti on acoustic bass. The Trio has recorded four albums which were extremely well received by critics all over the world.

Duduka is a resident of New York City.