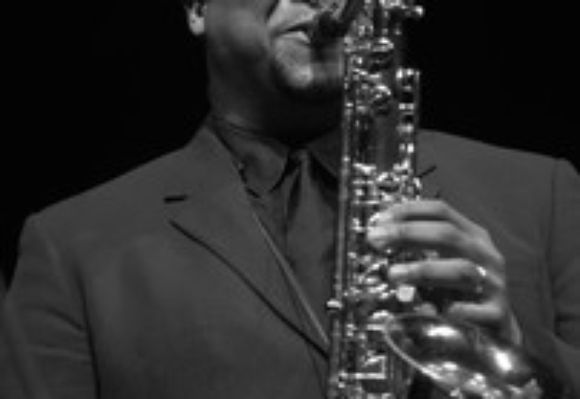 Jimmy Greene’s debut recording for Mack Avenue Records, Beautiful Life, is a celebration of the life of his 6-year-old daughter, Ana Márquez-Greene, whose life was tragically taken, along with 19 other children and 6 educators, on December 14, 2012 at Sandy Hook Elementary School in Newtown, Connecticut.

“I want the music to convey a sense of how Ana lived,” Greene says. He fulfills that mandate with an intense, cohesive, genre-spanning program, juxtaposing the hardcore instrumental jazz for which he is best known with traditional spirituals, contemporary Christian music, standard ballads, and three original songs framing his own lyrics. Animating the repertoire is a gold-standard rhythm section (Renee Rosnes, piano; Christian McBride, bass; Lewis Nash, drums), augmented at various points by guitarists Pat Metheny and Jonathan DuBose; pianists Kenny Barron and Cyrus Chestnut; vocalists Kurt Elling, Javier Colon and Latanya Farrell; spoken word from Tony® Award-winning actress Anika Noni Rose; a 13-piece string ensemble from the Hartford Symphony Orchestra; as well as an accomplished children’s choir. He composed or arranged every selection and plays tenor and soprano saxophones and flute with customary authority, melodic focus and abiding soulfulness. The project garnered two Grammy® nominations, one for Best Jazz Instrumental Album and one for Best Arrangement, Instruments and Vocals for Greene’s song “When I Come Home."

A native of Hartford, CT, Greene is considered one of the most respected saxophonists of his generation since his graduation from the Hartt School of Music in 1997. Greene’s quartet performs at the Village Vanguard, Smalls, and Smoke in New York, and has performed in festivals and concert venues worldwide, including tour dates throughout the United States, Italy, Russia, Israel, Canada, Brazil, and Uruguay. In one such appearance, Jim Macnie of the Village Voice said, “[Greene] is good for a couple of body chills every time you see him. He’s got a big barrelhouse sound, and a way of negotiating changes that make academic moves seem natural.” In addition to his 10 CD releases as a leader on the Mack Avenue, RCA Victor, Criss Cross and Sunnyside labels, Greene appears on 75 recordings as a sideman and has toured the world with the bands of Horace Silver, Freddie Hubbard, Tom Harrell, Harry Connick, Jr., Avishai Cohen, Lewis Nash, Steve Turre and Claudia Acuña among many others.

Greene, the composer, won a prestigious 2013 Governor’s Arts Award from the State of Connecticut, a 2012 Innovator Award in Music from the City of Hartford, a 2010 Creative Works grant from the University of Manitoba, a 2009 Artist Fellowship by the Greater Hartford Arts Council, a 2005 ASCAP / IAJE Commission in honor of Ornette Coleman, a 2005 Artist Fellowship in Music Composition by the State of Connecticut and a 2004 Chamber Music America Grant in jazz composition.

Greene is Assistant Professor of Music and Coordinator of Jazz Studies at Western Connecticut State University. He has performed clinics and master classes throughout the United States, Canada, Mexico, Brazil, Uruguay, Israel and Russia and has served as Assistant Professor of Jazz Saxophone at the University of Manitoba, Visiting Assistant Professor of Music at Purchase College (State University of New York), and as Lecturer at the Jackie McLean Institute of Jazz at the Hartt School (University of Hartford). Greene was the First Runner-Up in the 1996 Thelonious Monk Institute International Jazz Saxophone Competition, is currently a doctoral candidate in music at the Manhattan School of Music, received a M.Mus in Music Education from Boston University and a B.Mus in Jazz Studies from the Hartt School.