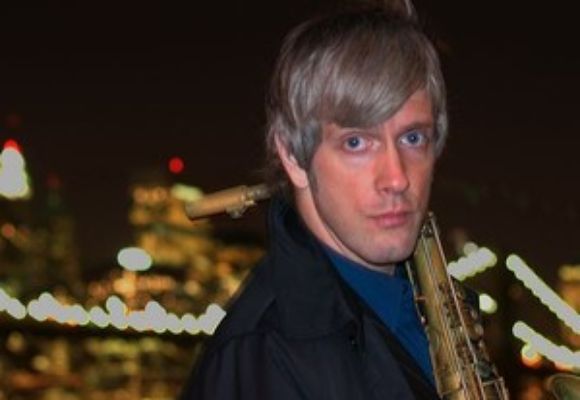 Born in Toronto, Canada on June 4, 1971, Grant Stewart was exposed to the music of Charlie Parker, Wardell Gray and Coleman Hawkins by his father, a high-school English teacher and semiprofessional guitarist. Father and son often played together for hours on end. It was through these early experiences and his father's encouragement that Stewart first developed a strong ear for melody, style, and improvisation. He began with the alto saxophone at age 10, and when he was 14 his first teacher, noted Toronto bandleader Pete Schofield, invited him to play professionally in Schofield's Big Band. At 17 he switched to the tenor saxophone and was soon playing with such master saxophonists as Pat Labarbara and Bob Mover. Stewart considers Mover to be one of his greatest teachers and among his strongest influences along with Sonny Rollins, John Coltrane, Don Byas, and Lester Young. Since moving to New York City at the age of 19, Stewart has studied with such masters as Donald Byrd, Barry Harris, and Joe Lovano, and performed with Curtis Fuller, John Hendricks, Clark Terry, Etta Jones, Bill Charlap, Frank Gant, Dan Barret, Bob Mover, Brad Mehldau, Russell Malone, Larry Goldings, Peter Bernstein, Jimmy Cobb,Harry Connick , Mickey Roker, Arthur Harper, Jimmy Lovelace, Cecil Payne, Dick Hymen, Herb Geller and was a member of the last Al Grey Sextet. Stewart can be found playing at such clubs in NY as, Birdland, Smoke, The Ketano, The Jazz Standard, Fat Cat and can be heard every Tuesday night at Smalls Jazz Club. Stewart has performed all over North America and Europe as well as Japan, Brazil, Taiwan and was one of the first jazz artists to be invited to play at the historical Hermitage Museum in St.Petersberg Russia. Grant was also a featured artist at the Guggenheim Museums' Jazz series with his trio-featuring Jimmy Cobb. Stewart has eight releases as a leader on various labels ,two as a co-leader with fellow tenor saxophonist Eric Alexander on the Criss Cross label as well as many others as a sideman (for a complete list go to grantstewartjazz.com ) His latest releases are The Shadow of Your Smile on Birds Records (Japan) and In the Still of the Night on Sharp Nine Records (USA) which has received worldwide critical acclaim .Keep an eye out for Stewart's upcoming release of Young at Heart in March of 2008 on Sharp Nine Records .

Here's what the critics are saying:

Powerful in a form that combines tension and relaxation like that of Sonny Rollins and Dexter Gordon, Grant is one of the most powerful stylists and one of the most under estimated on the scene . His sincerity ,demonstrated in his straightforward, honed music, affirms completely his power of expression. He is a burning representative of that New York style which is notably found to express itself at Small's, Mitch Borden's club. Working with a close-knit circle of musicians he frequents the aristocracy of jazz at the limits of the underground.

his huge sound , creativity and beautiful melodic sense combine to easily place him among the finest saxophonists on the scene today

Stewart's tenor is tight , rich and played full tone , instantly enveloping you in the sheer strength of his sound

staying away from established phrases and creating a researched personal sound , he produces a fresh resounding tenor

Stewart is one of the most dynamic modern day interpreters of the bebop languagedelivering his goods with a bold ,deep sound, rich melodic imagination , and flawless technique.

a pure jazzman - the real thing

an imposing presence, a warmth of sound, an authority of expression , a force in the lines, and an inspiration that carries his phrases to their full extent.