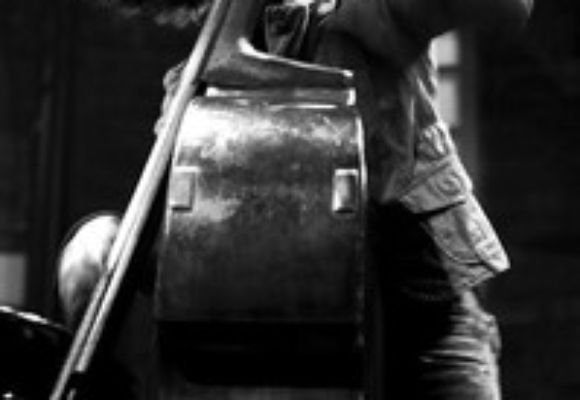 If esperanza is the Spanish word for hope, then bassist, vocalist and composer Esperanza Spalding could not have been given a more fitting name at birth. Blessed with uncanny instrumental chops, a multi-lingual voice that is part angel and part siren, and a natural beauty that borders on the hypnotic, the 23-year-old prodigy-turned-pro might well be the hope for the future of jazz and instrumental music. She is an irresistible performer, says The Seattle Times. She sings and plays bass at the same time and does a sort of interpretive dance as she plays&Her analysis of what's going on in jazz today is perceptive.

Irresistible. Interpretive. Perceptive. Such words are very much at the core of Spalding's life story, but the story is anything but typical. She was born in 1984 and raised on what she calls the other side of the tracks in a multi-lingual household and neighborhood in Portland, Oregon. Growing up in a single-parent home amid economically adverse circumstances, she learned early lessons in the meaning of perseverance and moral character from the role model whom she holds in the highest regard to this day  her mother. She was very strong-willed, very independent, says Spalding. She did a million things. She was a baker, a carpenter, she worked in foster care homes, she worked in food service, she worked with Cesar Chavez as a labor organizer. She was an amazing woman. She was hip enough to put a lot of negative things I saw as a child into some kind of context  even before I fully understood what she was saying. But even with a rock-solid role model, school did not come easy to Spalding, although not for any lack of intellectual acumen. She was both blessed and cursed with a highly intuitive learning style that often put her at odds with the traditional education system. On top of that, she was shut in by a lengthy illness as a child, and as a result, was home-schooled for a significant portion of her elementary school years. In the end, she never quite adjusted to learning by rote in the conventional school setting. It was just hard for me to fit into a setting where I was expected to sit in a room and swallow everything that was being fed to me, she recalls. Once I figured out what it was like to be home-schooled and basically self-taught, I couldn't fit back into the traditional environment. However, the one pursuit that made sense to Spalding from a very early age was music. At age four, after watching classical cellist Yo Yo Ma perform on an episode of Mister Rogers' Neighborhood, the roadmap was suddenly very clear. That was when I realized that I wanted to do something musical, she says. It was definitely the thing that hipped me to the whole idea of music as a creative pursuit. Within a year, she had essentially taught herself to play the violin well enough to land a spot in The Chamber Music Society of Oregon, a community orchestra that was open to both children and adult musicians. She stayed with the group for ten years, and by age 15, she had been elevated to a concertmaster position. But by then, she had also discovered the bass, and all of the non-classical avenues that the instrument could open for her. Suddenly, playing classical music in a community orchestra wasn't enough for this young teenager anymore. Before long she was playing blues, funk, hip-hop and a variety of other styles on the local club circuit. The funny thing was, I was the songwriter, but I had never experienced love before. Being the lyricist and the lead singer, I was making up songs about red wagons, toys and other childish interests. No one knew what I was singing about, but they liked the sound of it and they just ate it up.

At 16, Spalding left high school for good. Armed with her GED and aided by a generous scholarship, she enrolled in the music program at Portland State University. I was definitely the youngest bass player in the program, she says. I was 16, and I had been playing the bass for about a year and a half. Most of the cats in the program had already had at least eight years of training under their belts, and I was trying to play in these orchestras and do these Bach cello suites. It wasn't really flying, but if nothing else, my teachers were saying, Okay, she does have talent.' Berklee College of Music was the place where the pieces all came together and doors started opening. After a move to the opposite coast and three years of accelerated study, she not only earned a B.M., but also signed on as an instructor in 2005 at the age of 20  an appointment that has made her the youngest faculty member in the history of the college. She is the 2005 recipient of the prestigious Boston Jazz Society scholarship for outstanding musicianship. In addition to the studying and the teaching, the Berklee years have also created a host of networking opportunities. Since her move to the East Coast, Spalding has worked with several notable artists, including pianist Michel Camilo, vibraphonist Dave Samuels, bassist Stanley Clarke, guitarist Pat Metheny, singer Patti Austin and saxophonists Donald Harrison and Joe Lovano. Working with Joe was terrifying, she recalls, but he's a really generous person. I don't know if I was ready for the gig or not, but he had a lot of faith in me. It was an amazing learning experience.

The newest chapter of Spalding's journey begins with the release of her forthcoming international debut recording for Heads Up in May 2008. The album will be the first opportunity for a worldwide audience to witness her mesmerizing talents as an instrumentalist, vocalist and composer, but it's just the start of what she hopes to achieve in a career where the creative opportunities are almost limitless. I think there are some outside forces that have blessed me with creative talents, and I don't want to disrespect whatever plan the cosmos or the heavens or God or whoever might have for me, she explains. But based on what I know about myself right now, what I really want to do is reach people. I want to make great music, but I also want to use that talent to lift people up, and maybe show them some degree of hope where there might not be any in their lives. My name means hope' in Spanish, and it's a name I want to live up to. Esperanza Spalding is currently working in three projects. She is presenting her new album Esperanza with two different band formats, a trio composed by Esperanza, Otis Brown & Leo Genovese and a quartet with Otis Brown, Leo Genovese & Ricardo Vogt. From time to time she also works with the drummer Lyndon Rochelle. The last one is her work as a musician on Joe Lovano..s band.