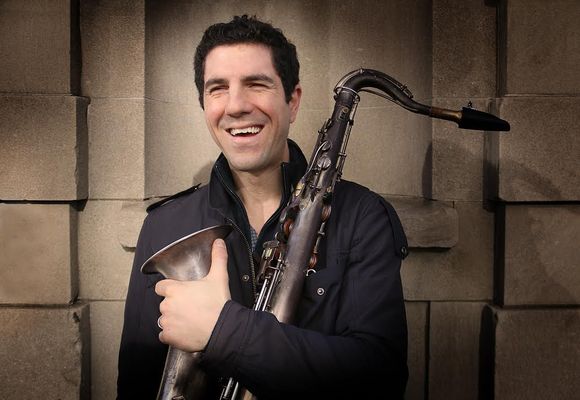 Brooklyn-based saxophonist Dan Blake’s wide-ranging career traverses many different musical communities both in and out of the jazz world. Dubbed a “virtuoso” by the New York Times, he has toured and recorded with great artists as different as avant guru Anthony Braxton, Grammy-winning jazz-pop star Esperanza Spalding and Grammy-nominated guitarist Julian Lage, and has forged a unique sound on his instrument through all of these collaborations. The Boston Globe has noted that Blake “regards tradition as a welcoming playground best approached with a sense of wonder and adventure,” an attitude he brings to his latest release for Sunnyside Records entitled The Digging, a trio date featuring world-renowned drummer Eric Harland and bassist Dmitry Ishenko. The recording is a follow-up of sorts to the 2012 release The Aquarian Suite (Brooklyn Jazz Underground Records), which was proclaimed by the Boston Phoenix to be “one of the most ridiculously satisfying discs we’ve heard in some time.” Blake also recently produced, composed and performed in an award-winning multi-media release called The Dust Moves, writtenfor the acclaimed string quartet Mivos Quartet that includes live animations.

In addition to his varied career as a composer and saxophonist, Blake is also active as a concert producer. In 2010 he founded and produces the annual Concert To Feed The Hungry, an event that raises funds and awareness for global struggle against hunger and malnutrition. A common thread that unites all of Blake’s work is a commitment to cultivating and maintaining strong collaborations within and across creative communities. “When you work with people, you inhabit some sort of world together, this feeling of connection,” Blake has said. “It's not about imposing an ideal. Music represents the value of those relationships. To perform with this kind of connection can make a very powerful statement that I believe reverberates outward to who knows where!”