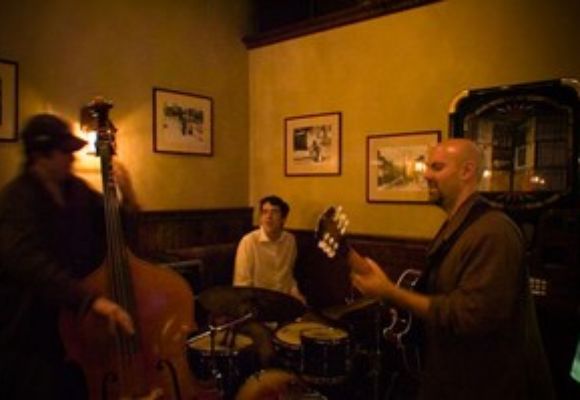 Hartford based guitarist Rich Goldstein graduated from the Hartt School of Music in 1993, and has since been involved as a dedicated faculty member and performer. He has appeared with a wide range of musicians including Andy Laverne, Nat Reeves Charles Flores, Horacio Hernandez, Giovanni Hidalgo, Houston Person, Stan Hope, Warren Chaisson, Reverend Hubert Powell, and Randy Johnston. He has performed at major jazz venues including Birdland, the Berklee Performance Center, Trumpets, the Zinc Bar, and the Jazz Gallery. Festival appearances include the Atlanta Jazz Fest (2001) Cancun Jazz Fest (2002), Festival of Arts and Ideas (2003), International Jazz Fest (2004), and the Sunken Garden Poetry Fest (2005). Recordings include Reminiscence; The Charles Flores Quartet featuring Horacio Hernandez (2000) and Something Makes Me Want to Dance; featuring Rob Zappulla and conducted and arranged by Lew Anderson. He has also recorded jingles for both radio and television. Mr. Goldstien also teaches guitar at Choate Rosemary Hall in Wallingford CT, and has twice been a guest artist at Baldwin Wallace College in Cleveland, OH.